How to make a standard rose

Rose standard or rose tree, is one of the most effective ways of growing roses. Stam roses can be miniature to 40 cm, they are usually grown in pots, or to reach a height of 2 meters or more. Following certain rules to make a standard rose can be grown in the climatic conditions of Central Russia. 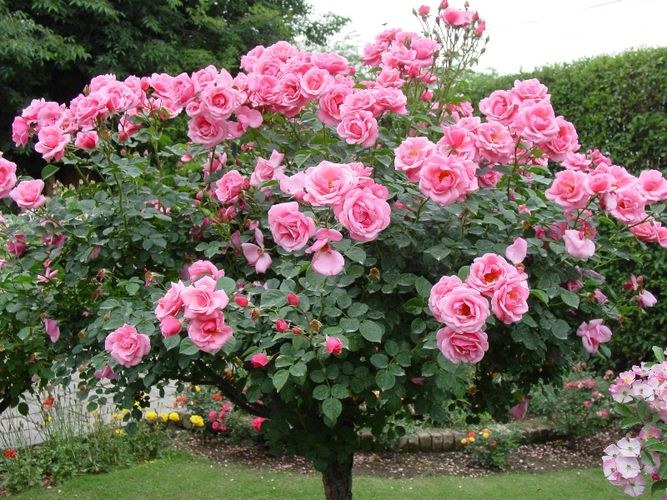 Related articles:
You will need
Instruction
1
Spend low pruning all of the shoots on the rose Bush. This stimulates the plant to the formation of new basal shoots. The number of shoots depends on plant variety, but usually, their number varies between 5-10.
2
Decide what is the height of the trunk. Typically, this height is from 0.7 to 1.2 m Is 3-4 weeks after spring pruning till the time when new shoots will grow to the desired height.
3
Cut off the lower leaves and thorns when the shoots reach the desired height. Interlace them together. Stronghold shoots in several places to tie a rope, which should be removed when they finally orderevent. Tie the trunk to the peg – it will not allow the plant to bend and will retain the slimness of the trunk. When Stam rose well enough, the peg can be removed.
4
Try to do standard rose from a Bush with a large number of shoots, as their number determines the number of inflorescences on the future of the pink tree.
5
Watch out during the summer that the trunk was not formed and the side shoots. Introduced processes to immediately wipe.
6
Cut faded blossoms, and in a few weeks, rose will give 2-3 new stems. In the period of abundant flowering of such pruning is necessary to carry out 2-3 times a week.
7
Begin to prepare the plant for winter since the end of August. Reduce watering and do not fertilize the rose with organic fertilizers. With the onset of frost wrap the trunk covering material. As covering material you can use different film used in construction as insulation.
8
Provide support for the expanding crown. Stam rose reaches its peak of flowering in 3-4 years after planting. Branches of standard roses, which are branches of a shrub, not a tree, it's hard to hold my own weight and many flower buds during the period of active flowering. To help the plant in various holders, which are sold in garden stores. However, the holders can be built independently of thin wooden slats and wire.
Useful advice
Standard rose requires the same watering and fertilizer are the same as a normal Bush rose.
Is the advice useful?
See also
Подписывайтесь на наш канал