How to find the side of a regular polygon

The figure formed by more than two lines, closes between them, is called a polygon. Each polygon has vertices and sides. Any of them can be right or wrong. 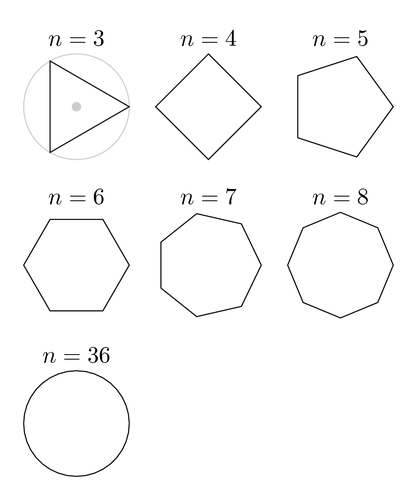 Related articles:
Instruction
1
The right polygon is a figure in which all sides are equal. For example, an equilateral triangle is a regular polygon, consisting of three closed lines. In this case, all of its angles equal to 60 °. Its sides are equal but not parallel to each other. Have the same property and other polygons, however, the angles they have other values. The only regular polygons whose sides are not only equal, but in pairs of parallel - square.If the problem you are given an equilateral triangle with the area of theu S, its unknown side can be found using angles and sides. First locate the height h of the triangle perpendicular to the base:h=a*sinα=a√3/2, where α=60° one of the angles adjacent to the base of the triangle.Guided by these considerations, convert the formula for finding the square so that it was possible to calculate the length of a side:S=1/2a*a√3/2=a^2*√3/4Отсюда it follows that the side a is equal to:a=2√S/√√3
2
The right side of the quadrangle find, using a slightly different method. If it is a square, as initial data, use it square or diagonal:S=a^2Следовательно, side a is:a=√Crome if given the diagonal, then the direction can be calculated and a different formula:a=d/√2
3
In most cases, the direction of the correct polygon can be determined by knowing the radius of the inscribed and circumscribed around the circle. It is known that there is a linkage between a side of the triangle and the radius of the circle described around this figure:a3=R√3, where R is the radius described okruzhnosti a circle inscribed in a triangle, then the formula takes a different form:a3=2r√3, where r is the radius of the inscribed okruzhnosti regular hexagon formula for finding the part at a known described radius (R) or inscribed (r) circles as follows:a6=R=2r√3/3Из these examples we can conclude, for any arbitrary n-gon the formula for finding sides in a General form as follows:a=2Rsin(α/2)=2rtg(α/2)
Is the advice useful?
See also
Присоединяйтесь к нам
New advices