How to easily learn to play backgammon

To learn the game of backgammon, do not have to hire a professional or to enroll. Just enough to understand the rules of the game, and the experience will come with time. Today there are many varieties of backgammon, but they all obey the basic rules. 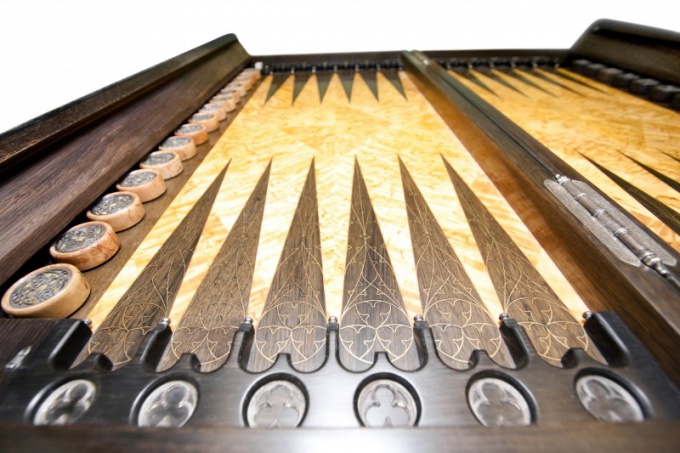 Related articles:
The game with a long history, born in Persia and became popular all over the world - backgammon, children in the Islamic world taught from childhood. And the thing is that in the treatises that have survived almost from the time of prophet Muhammad, the game is called the best exercise for the mind. Backgammon really develop logic and memory, promote concentration.

To begin the game, you will need 15 pieces for each player. A special Board used in this game has two pieces of the same 6 holes on the short side. This side consists of "items" presented in the form of elongated, narrow triangles. These triangles each player has 24 pieces with a specific numbering. The main task in this game is to rearrange the checkers in to your house, after which they are removed or "removed" from the playing field.

To prioritize the progress players will need to roll the dice, and which of them will drop a higher number starts the game first.

The movement of checkers in backgammon

Players have a fixed direction of movement of the checkers, but they must always move in a circle. Before any player makes a move, you need to roll the dice (the cubes are numbered from 1 to 6 sides) on the Board so that they do not burst out of her and hooked checkers. Otherwise the throw will be repeated. It is also worth noting that in one move checkers can move not once, but four times, but you must move your pieces strictly by the number of dropped points on the dice.

When you play different kinds of backgammon checkers can move in different ways, but always they need to move according to the quantity that fell on the two dice. The dice does not stack: first on points one bone can move, and then on the other. If you roll a double, then the number of steps is doubled.

The double call of the same combination of numbers on the two dice (cubes).

All the moves are mandatory and the player could not refuse even from him unfavorable movement. But there are cases when checkers move is impossible, in this case the course is passed. This game may not be anyone, not necessarily one player wins, one who has managed faster opponent to move all pieces on the field from one part to another, and then remove them from the Board. In case of victory the player gets 1 point or 2 points, when the second player has not had to endure the Board any of his checkers.

If the number of points is compared, it is necessary to make another attempt. In the case of continued game (the second game) begins to walk to the player who last time won.
Is the advice useful?
See also
Подписывайтесь на наш канал