How to pickle a herring

Whitefish – fish energy drink. His fat meat is absorbed by the human body almost completely, and charging it with vigor. Arachidonic acid contained in the whitefish, can cope with high physical loads. Bromine strengthens the nervous system and the copper helps the process of hematopoiesis. Mineral molybdenum supports normal teeth, because of the delay in the body fluoride. He, in turn, is also found in whitefish, and does not allow the teeth to break down, and provides prevention of tooth decay. In short, the whitefish is a fish that is difficult to replace. On the table she will take pride of place. Dishes made from whitefish, will be exquisite and sophisticated delicacies. And salted whitefish will be king, as during family dinner, and at a dinner party. 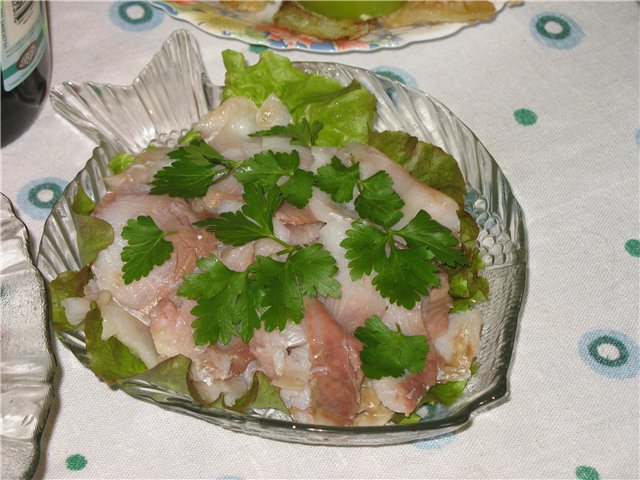 Related articles:
You will need
Instruction
1
The first thing you need to choose a fish for pickling. You are lucky if you saw in the sale of fresh whitefish. First, look him in the eye. They should be bulging, bright and clear. Then carefully inspect the gills. If they are red, whitefish fresh. Do not buy fresh fish without a head!
2
Choose frozen whitefish? The rules are the same: look at the eyes, look under the gills buy fish only has a head on his shoulders", and the icy crust is flat and smooth, no more than two millimeters thick. If the carcass whitefish out of shape, deformed and tattered, so her repeatedly thawed and frozen again. Refrain from buying such fish.
3
Whitefishand chose. Please be patient. It's best to defrost fish in the refrigerator. 7-9 hours - and your whitefish will be ready for salting.
4
Gut whitefish. The scales are not scrape. Rinse the herring in cold water, freeing the fish from mucus. Wipe off any moisture with a towel.
5
Weigh whitefish. In accordance with the weight prepare the other ingredients. Choose a pan in which to zaselyatsya fish, it must be placed completely in it.
6
Cut the whitefish along the ridge, dividing the fish into two parts. Try not to damage a thin film, covering the layer of fat on the abdomen whitefish.
7
Carefully remove fish from backbone.
8
Half of the prepared salt pour on the bottom of the pan. For pickling take coarse sea salt. The salt is removed from the fish moisture. Coarse sea salt at a low temperature dissolves slowly. She will need the moisture that it will pull from the fish.
9
Put whitefish scales for salt.
10
Meat whitefish pour sugar and salt white or black pepper. To taste can add chopped fresh dill.
11
Close the fish. If you have several carcasses whitefish, the first fish to leave in a flattened form, and put the meat side one more carcass.
12
The scaly side of whitefish pour the remaining salt.
13
On top muksun, put goods that would have fixed the fish in a fixed position. The goods should be light, to not "squeeze all the juice" of whitefish.
14
Leave whitefish for 24 or 36 hours in a cool place. The time salting depends on the size of the fish.
15
After 24 hours, boil the potatoes, slice the whitefish and serve.
Is the advice useful?
See also
Присоединяйтесь к нам
New advices