How to confess sins

One of the major Sacraments of Christianity is confession. On it the believer recalls his sins, repents of them, and asks God's forgiveness. He who asks mercy of the Heavenly Father, always gets her, but the repentance must be sincere and active. 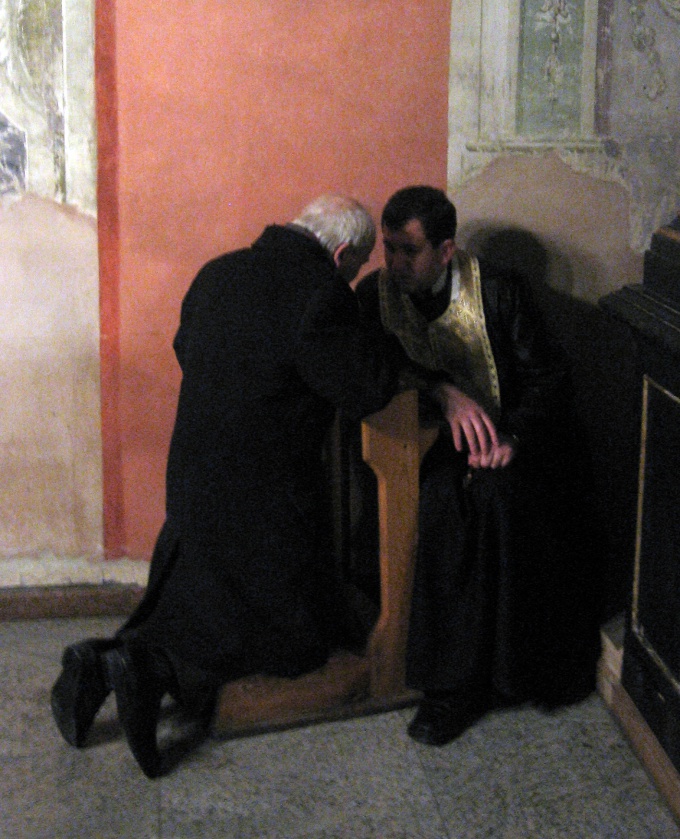 Related articles:
Instruction
1
You need to be aware of what you are guilty before God and man. Not only all known mortal sins – murder, theft, adultery, abortion, but daily sins, which permeated our life.Serious sin – indifference and amiloride to people. If you judge and condemn your neighbor – you have sinned condemnation. If you say that a sinless and righteous – sinful pride and self-praise. If you swear, smoke, drink, if irritable and angry, if you thought wished offended you evil man – you have sinned.A very common sin – the serpent. And do not be misled by the fact that the fortune teller as if praying before reveal your future or solve your problems. She suffers, and most likely, knows this. And you know that too fell into sin. Only gentlemen need to ask for help, and only on His grace rely.Sin is the indifference and neglect of prayer, the mention of the name of the Lord in vain, laziness and gluttony. Remember all your sins, write them down on a sheet of paper, so as not to get lost and not to forget in the confessional. And most importantly - sincerely forgive their abusers. Christians of all denominations pray the Lord: "And forgive us our debts, as we leave our debtors." If you do not forgive the debtor, whether to ask for forgiveness for their sins?
2
Confession usually starts before the beginning of the divine Liturgy. Listen carefully to the prayer of General confession in which the priest asks God's forgiveness for the many sins, and too mentally ask forgiveness of God. Then starts an individual confession, when each penitent approaches the priest and confess before the Lord his sins, both voluntary and involuntary.Do not attempt to refer to the circumstances or the fact that you are in sin brought by someone else. If you yourself justify the means are not justified of God. The priest allows the sins of the penitent, not his will but the name of the Lord. After the priest read the prayer, kiss the Cross and the gospel lying on the lectern.
3
If you want to partake of the Holy Mysteries, it is necessary to fast at least three days. To confession it is better to go the night before to the day of Communion at the Service not to be distracted by anything, completely focusing on prayer.Before bed on the eve of the Sacrament, besides the usual prayers at bedtime, you need to read the penitential Canon, canons to the most Holy Theotokos, Guardian angel and partaking of the Sacrament. Come to Communion with arms crossed on the chest, with humility and gratitude to the Lord for his mercy. After partaking of the Sacrament, listen to the prayer of thanksgiving.If you do not perceive by ear the Church Slavonic language at home before the icons, read the prayer on their own. Try as much as possible to keep the purity that you got after confession and Communion.
Useful advice
Remember that there is no Unforgiven sin is unrepentant.
Is the advice useful?
See also
Подписывайтесь на наш канал