How to write Russian word in English

The need to write Russian words by English alphabet letters on the Internet is rarely for the reason that the network has a large number of services that provide the ability to use Cyrillic letters, even if you don't have the Russian keyboard layout. But it is still possible to imagine specific cases where you need to write "transliteration" - the so-called text, in which Russian letters replaced with their English equivalents. 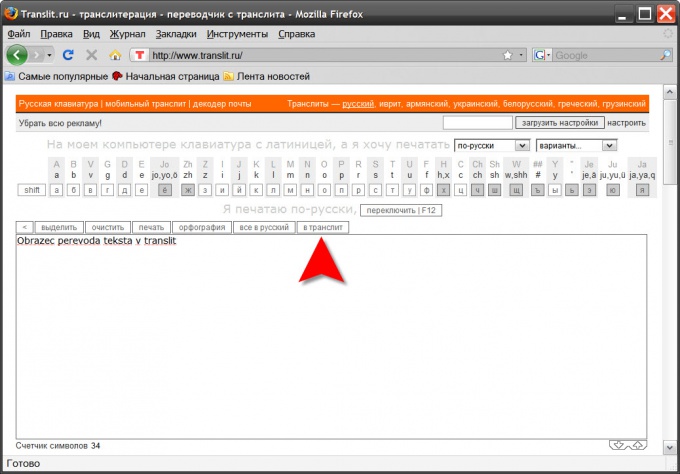 Related articles:
Instruction
1
Use any Internet automatic translation of the text you enter in the transliteration. This is the easiest way to write Russian words in English letters. For example, if you use the service http://translit.ruafter go to the main page can immediately start typing the desired text. At the end of the input text, word or phrase, just click the button that says "translit", all typed in Russian letters was transformed into the same, but the letters of the English alphabet. If you are not able to recruit a Russian text on the keyboard, you can click the desired letter placed on this web page above the input field. Here you can choose the direction of transliteration, and not only of these two alphabets (Russian and English). There is a version of the interface specifically designed for mobile devices running operating systems Symbian and Windows Mobile.
2
Use the table of conformity of Russian alphabet to English letters and combinations as a reference, if you want to write the words transliterated without further translation. These several tables, and you can also find on the web. For example, use the official wording of the relevant GOST called "transliteration Rules kirillovskoe letter Latin alphabet". Though not always and not everyone uses a match table specified in the Guest when it is important the ease of use and not in compliance. Can use other tables, for example published on the website Lingvotek.
3
Use memory-resident programs with the functions of transliteration, if you want to translate the text in translation without Internet connection. For example, the program Punto Switcher, primarily intended for automatic switching between Russian and English keyboard layouts, has the option. It can help translate the words of the Russian text in transliteration it is enough to select the desired fragment in the editor and press ALT + Scroll Lock.
Is the advice useful?
See also
Подписывайтесь на наш канал