How to sing with a guitar

Guitar is one of the most popular tools not only for gigs, but for home playing. This is no accident: it's light and compact, it is convenient to carry. However, even a few chords can become quite a worthy accompaniment if the performer takes them purely and confidently. Besides, in order to learn guitar, not necessarily good to read sheet music. Chord progression you can learn the and the tablatures. 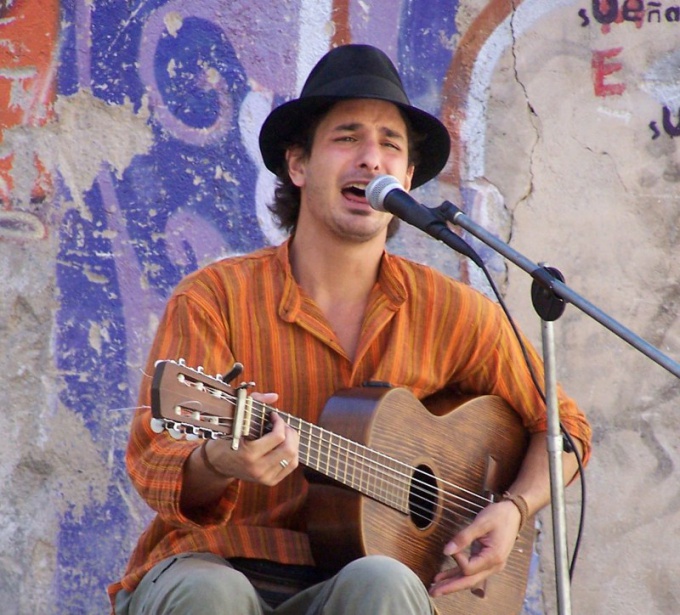 Related articles:
You will need
Instruction
1
Select the song you would like to learn. Listen to it a few times and try to memorize the words and melody. The text should be rewritten, especially if it is attached to zimovka, i.e., letter symbols of the chords. Try to memorize both the lyrics and the melody.
2
Learn to read ciprovci. For this you need to remember the letter symbols for the various sounds. In modern hymnals usually used Latin symbols, where the scale begins with the note La. It is denoted as A. the Following sounds natural La minor also have their own symbols. Do — s, re — D, mi — E, FA — F, Sol — G. the Exception is the sound of the sea. Old Russian cifrovih it is designated by the letter H, though, and goes after La. Beech In is denoted by in this case b flat. However, Western musicians do not use notation H and si they — V. This option is adopted, and many contemporary Russian musicians.
3
Determine the major or minor you written any song. Major sounds cheerful and fun, minor — sad. Learn not to confuse the concept of "fun" and "loud", "sad" and "quiet". Many novice artists tend to force the sound in a major key and understate the level in the minor. Keep in mind that a song can be written in different keys. For example, it can be a major verse and minor chorus.
4
Try to calculate the size. There are many options, but it is important for you to know how many beats there are in each measure. It is very well heard. Listen to the song, tapping the left hand strong beats. Listen again and right lightly tap the weak. Count how many weak shares placed between strong. Usually, the chords in the song change on the strong beat. With the exception of transitional chords that require resolution. They are a weak part and settled on strong.
5
View zimovka what harmonies you know and what you should learn. Find unknown chords, tabs and learn them in the most convenient position. Try to play the sequence. You don't have to sing, you just need to understand what fingers where to move. While singing will have to do it fast enough, so every permutation bring to automatism.
6
Experiment with the right hand. Each song has its own character that requires a certain technique. For example, songs are mostly played Robin, and pop and acoustic songs, rock, folk and other directions can be used different variants of the battle. However, the main technique you learn. Take the thumb of the right hand the bass on the downbeat, and then the upward or downward arpeggio of the other fingers in turn. When you learn how to do it confidently, try to play after the bass the chord together with your fingers. Do not strain the wrist, the hand must move absolutely freely.
7
Quietly hum a melody, accompanying himself on the guitar and changing chords in the right places. If this happened, you can begin to sing in full voice. You will be sure to sing loudly is easier than quiet. Don't forget to breathe correctly. Generally a breath is taken between phrases, in the very places where you change chords. Try to breathe from your stomach, not the chest. In men it is obtained automatically, and women need to control yourself. Proper breathing is necessary in order to form an air pillar with the support of the diaphragm. Sing some ligaments quite dangerous, you quickly lose the vote.
8
Think about the content of the song. This will give your performance the necessary expressiveness. Start singing right from the very first syllable. Many aspiring artists of his "swallow". Pronounce words clearly and understandably. Some consonants require special attention. For example, "p", "b", "d" and "t" should not sound too harsh. Lips in this case open exactly with the same force as in ordinary speech. Vowels in singing are reduced somewhat less than when you just speak.
9
Practice dynamics. Think about what phrases need to be louder, some quieter, where you need to dampen or enhance the sound. It depends on the content of the song.
10
If you have to sing into the microphone, remember that it is not necessary to force the sound. Sing quietly, as if no microphone is not.
Useful advice
It may happen that a sequence of chords that you know, uncomfortable for your voice. It is better to learn to play in all keys. However, at first, you can use a Capo. With it, the strings are clamped at the desired fret. Played for a learned sequence, but the product sounds in a different key.
Is the advice useful?
Присоединяйтесь к нам
New advices