The machine line consists of stitches. To stitch, you need to fill the machine the two threads (top and bottom). The top thread is tucked into the machine, the lower – in bobbin case. 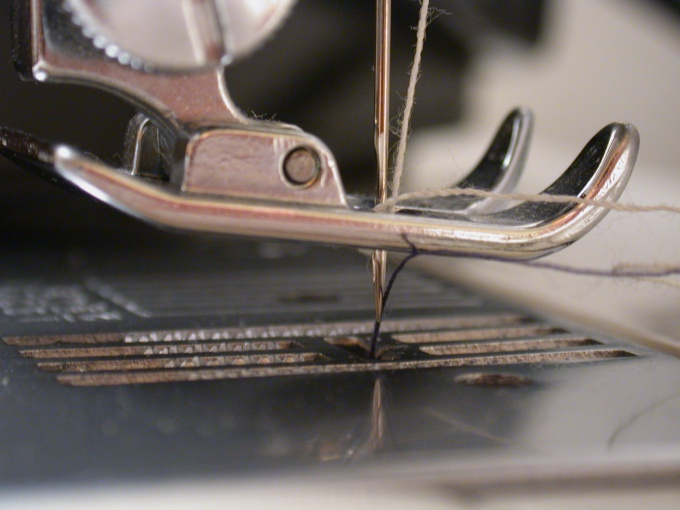 Related articles:
You will need
Instruction
1
Wind thread on bobbin case. First or take a few skeins on the cap manually to lock the threador put thread in the bobbin hole (at the beginning of the winding to hold this end of the thread). The cap is put on a special device for winding thread, which is part of the cars. The thread should be wound evenly. Depends on the quality of the stitching and thread breakage.
2
If your machine is of the vertical Shuttle, you need to first insert the cap in the bobbin, and then insert the bobbin into the machine (Shuttle machine) nozzle up until it clicks. Cap you need to insert so that the thread is held in the slot with a certain hand depending on the type of Shuttle. It is usually written in the instructions to the machine. If no instructions, and the machine does not sew, experiment with changing the direction.
3
If the machine has a horizontal hook, the bobbin is already built into the Shuttle. In this case, the bobbin case is wound with thread is inserted directly into the machine. With the direction of the thread here is similar.
4
Now tuck the upper thread of the machine. Cars may have some differences in configuration visually, this may lead to differences in threading. However, the principle is one. It must be understood.
5
Raise the presser foot using the lever, and the needle is set to its highest position. Put thread on the bobbin terminal and secure if necessary. The thread should unwind in a counterclockwise direction. Next thread we need to extend through one or more yarn guides. Then through a tension regulator, which can be outside the car (then a wheel with two disks), and can be hidden under the body. After that, the thread clings to the hook under the compensation spring (a thin springy hook, which can also be hidden), passes through the yarn guides, if any, and odevaetsya in the large eyelet of the thread take-up lever. Then through the next thread guide, the thread inserted into a needle with a special device or manually.
6
Then the needle is lowered to pull up the lower (Shuttle) thread.
Note
If you're not going to fill the car, it will not sew. However, be aware that there are other causes of failure of the machine from working properly the gas station.
Useful advice
In the modern household sewing machines all the devices thread are trying to minimize and hide under the body of the machine. A big plus of these machines is the sequence of threading the thread into the machine and its direction is described not only in instruction, but applied to the case. To fill this machine is very easy.
Is the advice useful?
See also
Подписывайтесь на наш канал