How to make a Board game with your hands

Board games help pass the time, and, in addition, promote development of fine motor skills in children form the skills of play behavior. How to make a simple Board game your hands? 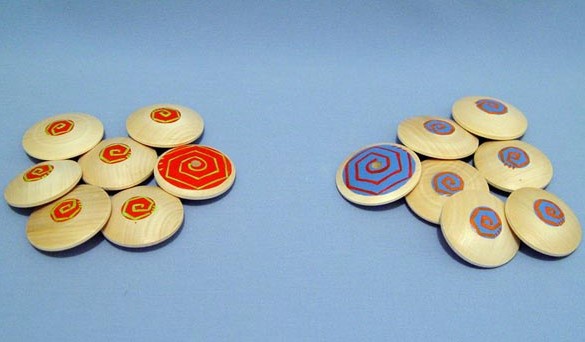 Related articles:
You will need
Instruction
1
There is an old Russian pastime – the game "tiddlywinks". It requires quite a few simple items: a small box with a height of 4-5 cm, and three dozen colorful "flea beetles". Fleas themselves traditionally constitute a circular plate the size of a large button. Edges of plates should be slightly ground off. When pressed, these "fleas" jump. The faster and harder you pressed, the higher jumps the projectile.
2
In the old days, "flea beetles" made of wood. If you decide to use wood, choose a lime. Suitable for this purpose and ordinary buttons of different colors – two, three or four (number of players). Very cute and simple "flea beetles" you get if you take a grain of bean, it is desirable to use a beans of two colors.
3
Prepare the playing field. It can be made from an ordinary box of chocolates. The box can be rectangular or even round. Glue the box with colored paper. Sides make single-color, and the bottom of the box split into two parts, each of which provide their color. Apply to the bottom line – the circle in the center of the field and the semi-circles on each side near the "gate." Playground for our "flea beetles" are ready.
4
Take a piece of felt or other dense material. From it cut two small circles. As the template is convenient to use a coffee Cup that you can just stroke path. Drives need for some play options. The fact that the beans better jump with a soft surface.
5
Game options can be any number, it does not always need the playing field. The game is based on jumping "flea beetles". Press the edge of the bean coin or a button, and it will jump like a live flea. Now it only remains to set the rules: to get the "flea" in a bowl, cover with a "flea" the other, to compete in the distance you can jump your "flea", etc.
6
When using the variant of the Board you need two players. Field put in front of him. Players with an equal number of "flea beetles" are located in front of the field. The challenge is to get the beans to the opposite gate. If you hit your color, you can pick up off the flea" and use it the next turn. If the "flea" was on the opponent's side without hitting the gate, the bean stays in place, the point is not awarded. The game lasts as long as some of the players runs out all the "fleas". The number of "flea beetles" can be different, for example, each team can put on the field for ten fasolino.
7
This game is worth almost a penny, and to make it possible together with their children for 15-20 minutes. Play and get pleasure from the old Russian fun.
Is the advice useful?
See also
Присоединяйтесь к нам
New advices