How to play Reversi

Reversi – the iconic Board game of the British and the Japanese. Need Board 8*8 cells and 64 chips. The cells are numbered vertically the Latin letters, horizontal numbers. One plays white, the other black chips (they contrast on both sides). 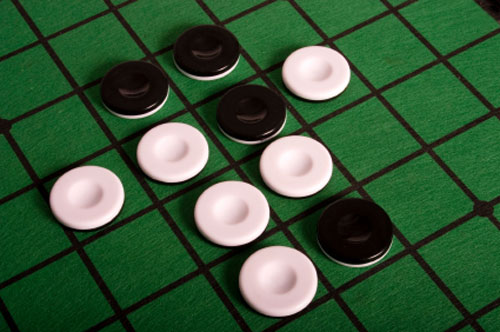 Related articles:
Instruction
1
In the beginning, in the center put 2 black pieces E4 and D5 and two white chips D4 and E5. The party is beginning – the opening, middle – middle game and the end – endgame. The first move of the black.
2
Place your chip so that between it and the existing chips on the field marked by a number of opponent's pieces, i.e. seal off all sides of his chips. Closed number of turns remains the first player.
3
In the case where the chip surrounds the opponent from all directions, they turn on all these lines.
4
The second step is the enemy, then you will walk on the queue. The main strategy is not to give the opponent a corner of the playing field. The middlegame is the freest and the most difficult part of the game. Here it is possible to strengthen the position.
5
But the most exciting part in the endgame. Here, you should not rush or to do the math. I think the chips that determine the ending. Choose any course feature.
6
If no options, the right turn from the opponent. The Board needs to be open all the chips. The winner is the one who on the field was more of their chips. In case of equal draw.
7
This game has many strategies. Professionals in the debut of advance calculate win-win steps to take advantage of their opportunities in the middle. Beginners usually want to lock the angle. Pros want to block the moves of the enemy or his possible options to make your own. It is considered the highest skill of the Japanese players in Reversi.
8
In the beginning, each player has an equal chance to win – this is the main interest of the game, but the steps not so much. It is important one move to turn over as many opponent's pieces.
9
Advice for beginners – take the main position at the edges of the field. The main thing in this game - to have experience and to understand its intricacies. Reversi is also called start to master the Japanese game of Go.
Is the advice useful?
Подписывайтесь на наш канал