How to lock keyboard

Keypad lock can not be viewed as a means of protection from unauthorized access to information. But to prevent accidental key presses when the phone is in your pocket, or if on the keyboard of the computer leaned or anything put it will help. 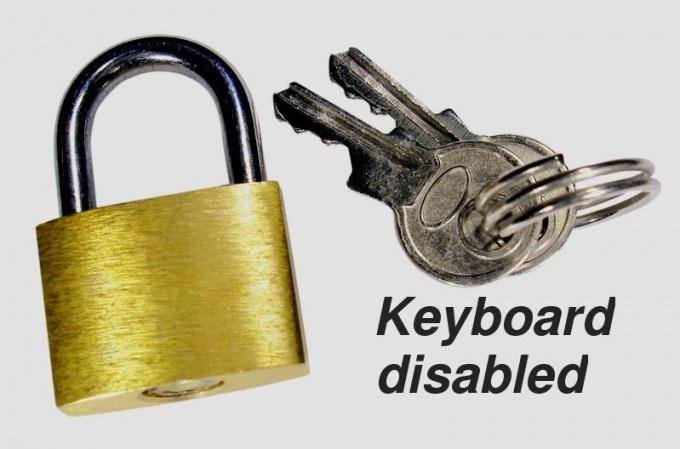 Related articles:
Instruction
1
Computer assembled in the body of the form factor AT, equipped with a keyboard lock. If you insert into a lock with the included key and turn it counterclockwise, the keyboard will stop working. To unlock turn the key counter-clockwise (castles some structures have the opposite logic). If no key will fit any other, supplied with the keypad lock of the same design - the secret these locks are not.
2
The case form factor ATX keyboard lock is missing. But you can add it to the very keyboard. When it is disconnected from the car, disassemble it, find it on Board the oxide capacitor and cut the track, running from its positive output to the chip. Parallel to the incision connect a switch and position it in a convenient place of the keypad enclosure. To lock the keypad, open the switch to unlock - lock. Note that the LEDs of the keyboard immediately after unlocking can not work properly. To synchronize their state with the actual settings of the controller, press the Caps Lock key two times.
3
Keyboard some manufacturers, for example, Defender, controller equipped with program lock. They have an additional Fn key and one of the F-keys shows the lock. To disable this keyboard, press the keys simultaneously. To unlock hit them again. A similar function is provided in many laptops where the Fn key is much more common.
4
The operating system can lock the keyboard along with the screen. To do this, open the settings dialog of the screen saver (the way in which it is opened depends on the OS). Find the checkbox "require password" or similar and place it. Install convenient time of inactivity after which you must run a screen saver. Now after its launch the keyboard will be locked. To unblock it, move the mouse or press any key. Then in Windows press Ctrl+Alt+Del and enter a password, but in Linux just type the password (note that the second OS press Ctrl+Alt+Del can cause a reboot without warning).
5
To lock the keypad of the Motorola phone, press simultaneously keys with svetochkaa and bars. Unlock produce in the same way. The Nokia without touch screen lock and unlock the keypad quickly in succession (not simultaneously) by pressing the left podarennoe keys and stars. During a long inaction Nokia lock itself, if this function is not disabled via the menu.
6
Independently locked and Nokia phones with touch screen and also the Apple iPhone. To unlock or force to block the first one, slide down the lever located on the right side. After that he will return to the original position automatically. To unlock the second phone look on the screen in the lower left corner of the circle, put your finger on it and drag the circle with your finger to the right.
7
Phone form factor "clamshell" and "slider" automatically block the keyboard when closing and unlock when opening. Some folding and sliding Nokia phones have two keyboards: hidden with all the letters of the alphabet and is constantly open with numbers. The second block, and unlock the way stated above.
Is the advice useful?
See also
Присоединяйтесь к нам
New advices