Where to go in Vladimir

Vladimir — Russian city, administrative center of Vladimir region, located on the left Bank of the Klyazma 176 km East of Moscow. This town was formerly the ancient capital of Eastern Russia, and in modern times is one of the country's largest centers of tourism. 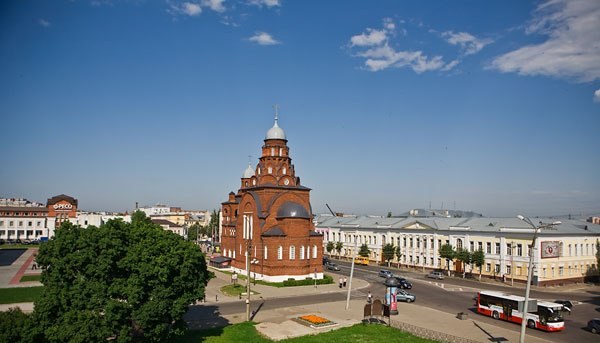 Vladimir is one of the cities "Golden Ring" of Russia. Founded in 1108 by Prince Vladimir Monomakh as a fortress with strategic importance for the protection of foreigners. Defended South-Eastern borders of the Rostov-Suzdal Principality.

A city on the Klyazma river is rightly proud of still preserved monuments of its past, listed in the UNESCO world heritage list. Vladimir is a city with a rich history, which has withstood the attacks of foreign invaders - the Mongols, poles and Germans. Now it is a booming regional centre, combining as monuments and new buildings in the art Nouveau style.

All over the world Vladimir is famous for its Souvenirs: magnificent goods from birch bark, fabric, wood, ornaments made of stones and enamel, crystal, lacquer miniatures. Especially popular among tourists Souvenirs depicting architectural monuments: Golden Gates, the assumption Cathedral, the Cathedral of the Intercession on the Nerl and in Bogolyubovo.

Be sure to visit the assumption Cathedral, Vladimir standing on the ground for more than 800 years. He witnessed the rapid blossoming of the Vladimir-Suzdal and its brutal destruction by the hordes of Mongol invaders. The Cathedral is a true treasure trove of ancient culture. Within its walls preserved examples of art by the best artists of different ages from the anonymous masters of the middle of the 12th century to Andrei Rublev and other geniuses of 17-18 centuries.

In the necropolis of the Cathedral of the assumption, located in the gallery, buried Vladimir the great men of princely blood: Andrey Bogolyubsky, Vsevolod the Big Nest, his son George and others. Are buried here and the old Russian writers – Bishop Simon ("Kiev-Pechora Patericon") and Serapion of Vladimir.

In addition to these masterpieces of Russian architecture, the city has other monuments, reflecting different milestones of the historical development of Vladimir Trinity Church, the assumption Cathedral of the Knyaginin monastery, the monastery of the Nativity.

Near the Golden gate is the exhibition "Old Vladimir". It is located in the former water tower, built in 1912 and had long ago lost its original purpose. Exposition is housed in it now, is a story about the city of the late 19th and early 20th centuries. It accurately recreates the atmosphere of the old town — middle-class, bureaucratic, merchant.

To emphasize the full flavor of the era it recreates the interiors of a wealthy citizen, police station, Church, shops, restaurant. All this is accompanied by an authentic newspaper clippings of the time. The exposition occupies three floors, the fourth equipped with an observation deck which offers scenic views of the city with numerous architectural monuments, among which stand out the white-stone cathedrals of the 12th century.