How to make bracelets out of rubber bands

The world girls have taken a new interest – weave bracelets out of small silicone rubber bands. Bright bracelets with fun wear: girls 5-16 years and adults. Want to weave a piece of the rainbow? Patience and imagination. 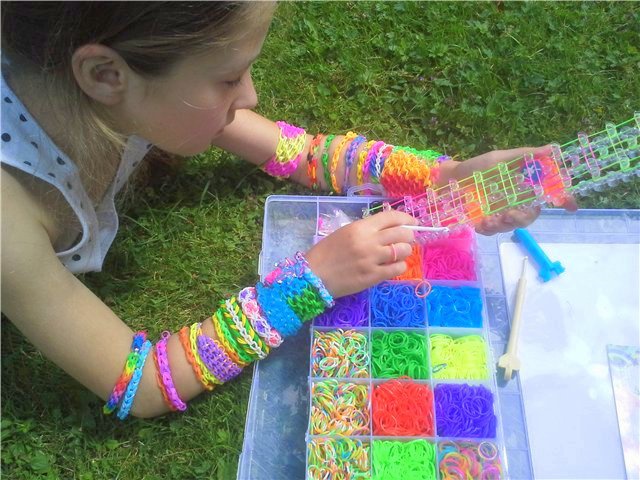 The first step to get started – acquiring the necessary tools. Kits for weaving of elastic bands are called "Rainbow loom" ("Rainbow shape") or "Loom bands" ("weaving of gum") and are sold in stationery stores. You can also order any product online.

For the safety of the child machines for weaving and other tools made of plastic. Some kits for the older age category there is a metal hook.

Getting started creating bracelets, clear and prepare work space: Desk, chair with good back support, a lamp for lighting. Kids better weave together with parents to self-indulgence did not lead to injury (it happened that a taut rubber band shot in the eye like a slingshot).

Want to weave a bracelet with a pattern similar to the pigtail? Select what will be your bracelet – multi-colored or monochromatic. For multicolor bracelet mix color rubber bands through one.

Take a mini-frame (loom) to weave. In appearance it is similar to a slingshot. Put the rubber band on horns, twisted by eight. The next two bands put on to avoid twisting. Then hook hook the bottom rubber band over the left edge and move it in the middle of the slingshot. Do the same with the right edge. You should get two bands with a twisted knot in the middle.

Put on top of one elastic band in the usual way. Hook one end of the Central elastic bands and move in the middle. The second edge leave in place. Hook the other end on the lower bands (if there were left then the right and Vice versa) and slip in the middle.

Go the same actions: wear an elastic band podzeplje the edge on the average, shifting it into the middle, and then lower. Alternate edges so that observed colours (if the rubber band multicolor).

In the end, hook the bottom rubber band over both edges, shifting in the middle. The remaining average catch over the edge and move it to the other "horn." Get two loops on a single post. Stretch loop, pulling it over both columns of the frame. Take the clasp and hooked the two loops in the middle, remove the finished bracelet from the frame.

Attention: do not allow your child to spin on your toes! Twisted rubber band can restrict blood flow and damage delicate baby fingers.

More complicated bracelets are weaved on a big loom and require attention and perseverance. Learning to weave simple bracelets, go to the complex. And the original bracelet will add a woven beads and pendants". Be creative and give joy to yourself and others.