What if food went down the wrong throat

If the person choked on food, it is quite dangerous condition that may lead to irreparable consequences. It is important to know what to do if you choked yourself, and how to assist in this situation their loved ones. 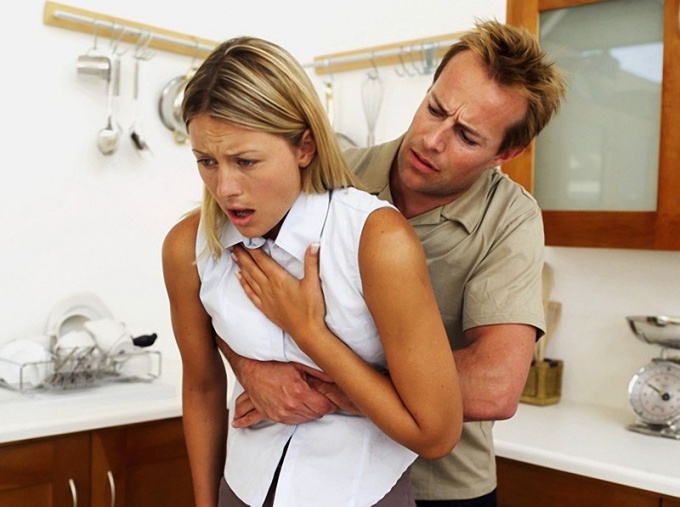 Food caught in airway: your actions

Dyspnea, which occurs in such cases may entail loss of consciousness. And when a person is lost and does not regain consciousness within a few minutes, the blood can do to stop the brain and occur death. When injected into the throat of a small piece of food, the victim usually clears throat himself, without assistance. Remember that coughing is a normal reaction by which our body tries to expel the foreign object from the trachea.


If you choke, take a slow breath, simultaneously straightening and then exhale vigorously, bending in the waist. So it will be easier to cough. Not to knock on the back of him who choked on a piece lodged in her throat, hitting even deeper and completely block the airway. But if after 2-3 minutes the person is still unable to cough or large piece of food is completely cut off his breathing, first aid in this situation is necessary.

The Technique Of The Heimlich Maneuver

To understand that there is an immediate threat to life, on a person's appearance: strong red or blue face, convulsive attempts to breathe. In such circumstances, you need to call an ambulance and use the technique of the Heimlich maneuver, named after who discovered his doctor of medicine from the United States.


Sequence of actions:
Approach to choking on the man from behind and encircle his torso.

Hand compressed in a fist, pressed against the abdomen of the victim (in the area between the ribs and the navel) from the side where the thumb.

Second hand to put on top of the fist and a sharp push in the direction to the diaphragm to push it into the stomach.

With elbows bent vigorously, trying not to compress the victim in the chest.

In case of need, the procedure can be repeated several times, until breathing finally restored.


If the person is unconscious:
To lay the victim on a horizontal surface face up and sit astride it in the hips.

To lay their hands on one another and place them on the man's belly, just below the solar plexus.

Dramatically to put pressure on the abdomen toward the diaphragm, pushing it all the body.


If food went down the wrong throat, and then the victim came to, but shortness of breath and cough persists, you may need to enlist the help of a doctor: possible foreign body remains in the trachea.
Is the advice useful?
See also
Подписывайтесь на наш канал