Why not get the meringue in the oven with convection

There are many people who love sweets and treats. One of the most delicious treats is the meringue. Many prepare this product at home. For making the necessary oven. However, in the convection oven meringue is not always. 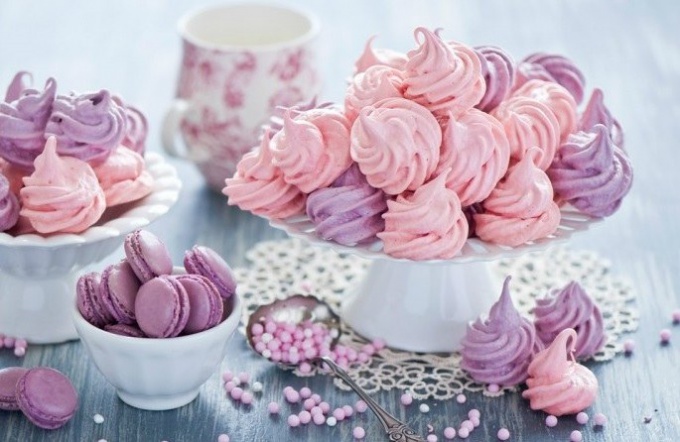 How to cook meringue?

The composition of the meringue is surprisingly very simple. Its main ingredients are egg whites and sugar. Sometimes meringue add nut flour and starch. Such a small number of the components of the dessert does not mean to cook the product will be easy. For the inexperienced cook meringue can bring a lot of surprises. Because of proper cooking meringue, a person must possess theoretical knowledge.

The preparation of this dessert, a meringue may be carried out in three ways.

The first one is called French. This method is the most simple in execution. It can be used for attempts to master this dish, and for making meringues are simple shapes that do not have fine patterns. The mass of the proteins obtained lush and strong, but the bubbles in the product are clearly differentiated. Meringue in French is prepared thus: chilled whites whipped until stiff with a pinch of salt, then gradually add sugar or sugar powder, after which the whole mass is whipped to the "stiff peak".

The second method of cooking the meringue Italian. It differs from French in that instead of sugar in dessert added hard-boiled sugar syrup. The hot syrup is poured into the product in a thin stream. Whites whipped until then, until the mixture has cooled.

Third, the most time-consuming method of cooking the meringue Swiss. For its realization it is necessary to construct a steam bath. In this way the meringue get the most dense, strong and persistent. The mass is steamed, you can create cookies of various shapes and patterns. Their main advantage is that they dry quickly. Cooking is so over the pot of boiling water installed capacity with proteins and sugar. The bottom of the bowl should not touch the boiling water. To dissolve the sugar whites whipped very slowly. Then the rate of beating increases. The result is a dense, compact mass.

Why can't I cook the meringue in the oven with the convection?

Some people prepare this dessert with the meringue in the oven. In the end, the product does not work the way man wants to see him. It's all in the convection mode. Convection affects the way that the meringue dries. To be more precise, the impact for dessert have moving streams of hot air. During the preparation of meringue, you cannot move, and the oven open. It is necessary to avoid any air movement, and certainly not to create it artificially. Where possible it is best to turn off convection.
Is the advice useful?
See also
Присоединяйтесь к нам
New advices