What a Saint to pray for wealth and material prosperity

Saint Spyridon of Trimyphunteia helps to convey to God the prayers of believers about the improvement of housing issues, money, successfully buying and selling property, business prosperity. He can pray for health, family welfare and procreation. 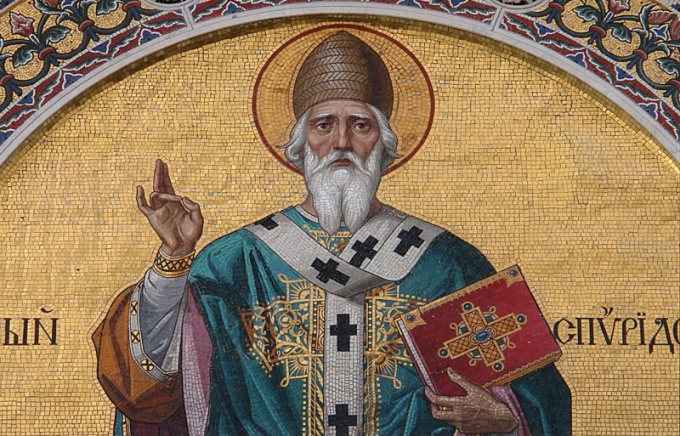 Related articles:
According to the Church canons in the Orthodox Church it is customary to come with a prayer for family happiness, procreation and health. You can not ask for material goods and to complain of financial distress.

However, in Christianity there is Holy, you can pray and ask for help in finding a promising job, buying a home and about financial stability. His name is Saint Spyridon of Trimyphunteia. He can't ask too much, but to those who really need, it will certainly help in resolving difficult situations and will show the right path.

Saint Spyridon was born in Cyprus, he suffered from poverty and deprivation, lived in a wealthy family, he inherited the big house and rich land. He lived quietly in Trimifunt and always helped the poor, was elected to the position of Bishop in his native city.

He decided to change his life after the death of his beloved wife: he sold all his wealth, the money distributed to the needy and went wandering through the world. During the life of Saint Spyridon performed many miracles, for example, turned a snake to gold and gave the precious metal a poor peasant, managed to raise the girl and her mother.

Spyridon is known as the defender of the poor and helper in turning to God with prayers for material welfare. The day of memory of Spyridon – December 12, this time in Russia, called Solonovato, when the winter was cold, and the sun – for the summer.

How and where to pray to St. Spiridon Trimifuntsky?

Particles of the relics of St. Spyridon are kept in Moscow in two churches: the Church of the Resurrection in Uspensky Vrazhek and in the intercession Church Danilov monastery. In Samara in honor of Spyridon, built the temple, where, too, are relics of the Saint.

Pray Spiridon Trimifuntsky not only in Church but also at home. You need to buy the icon of the Saint and read acafest 40 consecutive days at any time, in addition to the post. Prayer is to be read as long as the problem is solved, which apply to the Holy.

The Orthodox pray for the financial welfare of St. Spyridon Trimifuntsky and know that he will help all worshipers. To the temples constantly traveling, the velvet clothes and shoes – symbols of the Holy. They constantly wear out and are replaced by new ones. Worn clothing cut into small pieces, which are given to believers.
Is the advice useful?
See also
Подписывайтесь на наш канал