What is the cross better buy: gold or silver

The cross is not just a decoration, a symbol of the Christian faith, a talisman against evil. If you choose this jewelry mainly adhere to many rules and trends of fashion, but also the requirements of the Church must be considered in order to know exactly what to prefer – silver or gold. 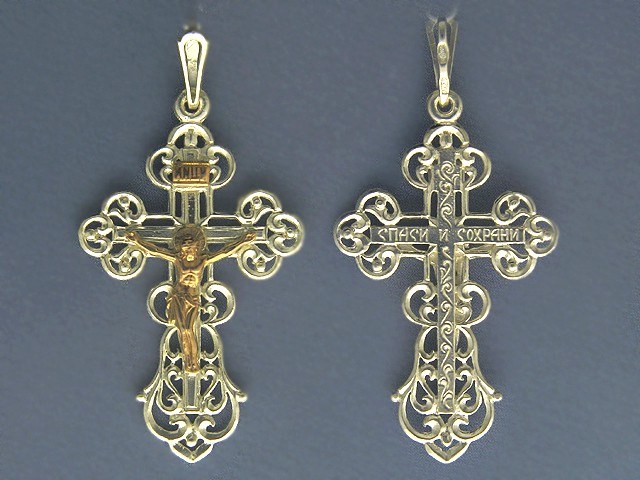 Related articles:
Originally the cross was a sign of the Christian religion of man, and of what material it was made, had no value. Only the middle of the XVIII century crucifix became an ornament. People belonging to upper class, considered it unworthy to wear a tin or wooden crosses, as the common people, and sought to acquire gold or at least silver, and the richest was decorated with the symbol of faith precious stones.

In the early 90-ies of the last century, the cross had lost its true meaning among the ordinary people and became a symbol of the so-called "new Russians". Only true followers of Christianity at all times observe the Christian canons and for them, the size and material of the cross had no value.

Now Christianity back their position, many tend to get baptized and pectoral cross. But when choosing this article of faith most people still prefer the expensive of his options, making a choice rather according to the rules of fashion, and not religion.

The choice of the pectoral cross according to the Church rules

Before the rite of baptism to many, the question arises about what kind of cross to choose, gold or silver. Actually, the Church does not set any rules regarding the material of which must be completed pectoral cross. But, according to ancient ecclesiastical annals, initially gold was considered sinful by the metal, which leads to strife and wars. And now you can see on the shelves of Church benches and stalls great choice is the silver pectoral cross and gold are sold mainly to jewelry shops and boutiques.

But to wear a gold pectoral cross is not a sin, moreover, attributes of the Christian faith from expensive material in the modern world is kind of a tribute to faith, her respect and reverence for God. The only rules that recommend that the clergy is the necessity of lighting pectoral cross, bought all of the walls of the temple, and the presence on the reverse the inscription "Save and protect".

The choice of the cross according to the rules of fashion

And gold and silver crosses have always been popular and fashionable jewelry. To give preference to one or another metal is necessary only in accordance with the style of the decorations that are in the "Arsenal", that is, if most of the jewelry ladies are made of silver, and the cross is better to buy silver as the chain for him.

Gold cross, of course, have a number of advantages – the metal does not darken, do not cause allergic reactions. But for everyday wear as a symbol of religion is a decoration for some, it is a little expensive.

No less original and looks a little silver cross. The main advantage of this metal is that it is almost universal, that is combined with any type and color of fabric with any style of clothing and will not look pretentious, even complete with the usual top.

But the main criterion for the selection of cross, nevertheless, must be your own taste and sense of proportion, not fashion trends or any other rules.
Is the advice useful?
See also
Присоединяйтесь к нам
New advices