How to replace gimbal crossbar

Usually a replacement universal joint crosses transmission is carried out after the occurrence of the metallic "clicks" when starting the vehicle, also in case of detection of its backlash. To replace it should be from two crosses, even if the second does not need to be replaced. This operation is simple and conduct it independently. 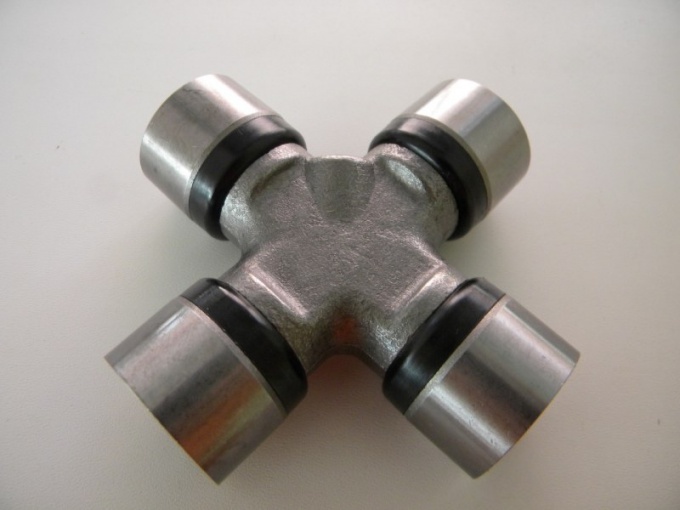 Related articles:
You will need
Instruction
1
Install the vehicle on a pit or hoist. Remove the driveshaft and clean it thoroughly from dirt and oil parts u-joints. Take a screwdriver and mark the position of the forks of the cardan joint. This is required, since the propeller shafts are balanced during Assembly at the factory. During subsequent assemblies need to maintain the relative positions of the parts, otherwise the vehicle will occur vibration.
2
Take a hammer and lightly tap sort plugs inside the needle bearing cups to be able to get the retaining rings. The pliers squeeze the ends of the retaining ring. Helping a screwdriver, remove it from the universal joint. In the same way, remove the remaining retaining rings.
3
Put under the eyelet yoke hinge hollow point-blank range. Install a glass bearing frame. Take a hammer and lightly tap on it mypressure bearing. Rotate the driveshaft 180 degrees and mypressure next Cup needle bearing, applying light blows to the axle crosses through the mandrel.
4
Remove the plug flange. Remove the mechanical seal of the bearing. Mypressure the remaining bearings and remove the spider joint of the propeller shaft. In the same way disassemble the second hinge.
5
Install the new d-pad in the reverse order, aligning the marks that were made prior to disassembly with the "blue" grease the needle bearings. The d-pad and the fork joints put in such a way to grease the d-pad and moving the plugs were located on one side of the shaft and in the same plane. Oiler crosses from the other end of the shaft must be shifted 90 degrees to the left during the movement of the car. Check ease of movement of the forks after Assembly, u-joints, they should not have jamming and backlash.
Is the advice useful?
See also
Присоединяйтесь к нам
New advices