Meat marinated with kiwi, it turns out tender and tasty. It is easier to cook beef in a slow cooker, so if you have in the kitchen is the assistant, the cook flavorful meat in it. 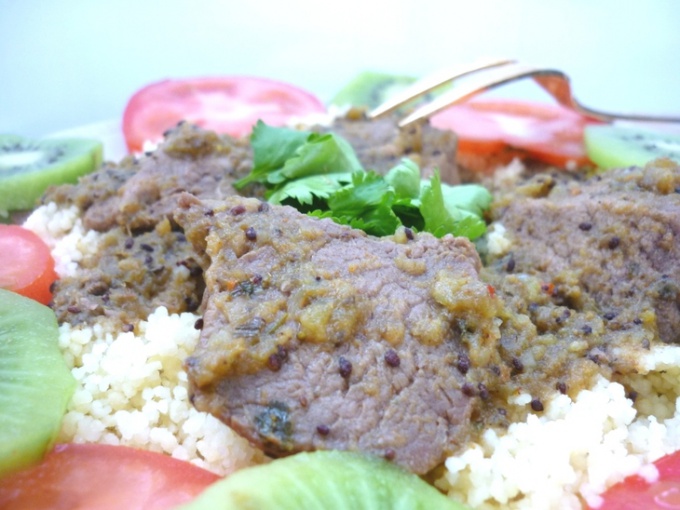 Related articles:
You will need
Instruction
1
Clean kiwi from the skin, put it into a blender and punch to a pulp. Add universal seasoning for meat, pepper and salt to taste, mix thoroughly.
2
Take a piece of beef, wash it, dry it on paper towels and cut into medium pieces - they should be comfortable there.
3
Put the beef in the marinade kiwi, stir, close the bowl with cling film, refrigerate for half an hour. Cover the pot for sure! In a container of meat should not be exposed to odors from the refrigerator. Longer marinating is not recommended, as 30 minutes is enough to keep the meat soaked in the exotic scent of kiwi.
4
In the bowl multivarki put the meat, put it on mode "Stewing", cook for 45 minutes. Can be cooked in the steamer - will be not less tasty meat. Well, if you have in the kitchen such equipment, you can stew beef in the pan with the lid closed until tender, stirring occasionally meat. From the oven the meat is too tasty.
5
Ready beef serve hot immediately. As a garnish can serve with fresh tomatoes and kiwi fruit, sliced.
Note
This recipe in mashed kiwi fruit can marinate any meat. Of course, the combination of kiwi fruit and meat.
Is the advice useful?
See also
Присоединяйтесь к нам
New advices