How to translate kilowatt to horsepower

First power measurement "horsepower" was used by the Creator of the steam engine and since then was widely used in the motor industry. However, with the spread of the metric system this unit was recommended to be superseded by the SI unit of power is watt. Now sometimes you have to count watts and derived units in horse power and back. 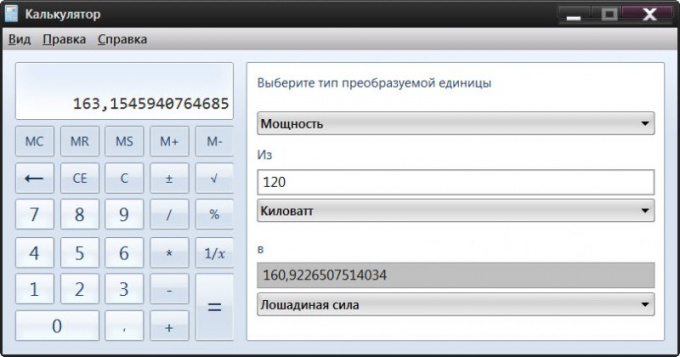 Related articles:
Instruction
1
Please specify in which of several existing units called "horsepower", you need to translate measured in kilowatts value. Most likely you need used in Russia and most European countries "metric" horsepower it is denoted by HP (in Russia), PS (Germany), ch (in France), pk (in Dutch). This unit is equivalent to 735,49875 watts. In addition to it there are mainly used in the USA and the UK unit of the same name, denoted by hp and the corresponding 745,69987158227022 watts. In the US there are two options within this unit of power: "boiler" (9809,5 W) and "electric" (746 W) horse power.
2
Divide the value of the source power measured in kilowatts, which is one-thousandth of a coefficient corresponding to the desired option horse power. For the made in Russia of the standard share should 0,73549875, and used in the United States and great Britain - by 0,74569987158227022. For example, a power of 120 kW corresponds to the value of 120/0,73549875=163,154594 HP or 120/0,74569987158227022=160,922651 hp.
3
Take, for example, a built-in operating system Windows calculator for the practical conversion of kilowatts to horse power. You can access it through a standard dialog box run programs - press win and r, then type calc and click the OK button in the run dialog. After the appearance of the program interface on the screen enter the original value in kilowatts and press the slash ("slash"). Then enter the conversion factor (see previous step) and press enter. The app will calculate and display the equivalent of the original value in horsepower.
4
If you are using Windows 7 and you want to obtain the final value used in the US and UK versions of horsepower, the operation can be simplified. When running the calculator, press ctrl + u, and the interface will be an additional panel to convert units. In the top drop-down list of this panel select "Power". In the "From" field, input the initial value and in the drop-down list underneath, select "Kilowatt". In the lower list select "HP" and in the line above it will see the value.
Is the advice useful?
See also
Подписывайтесь на наш канал