What does the tattoo of an angel

Tattoos with angels are very popular with both men and women. Everyone puts in them a special importance. Someone makes a tattoo as a sign of faith in God, someone as protection against supernatural forces. Angels are divine messengers, protecting and guarding people. Therefore, the drawing pictures of angels carries religious meaning, and symbolizes protection, spirituality, human kindness, peace and love. 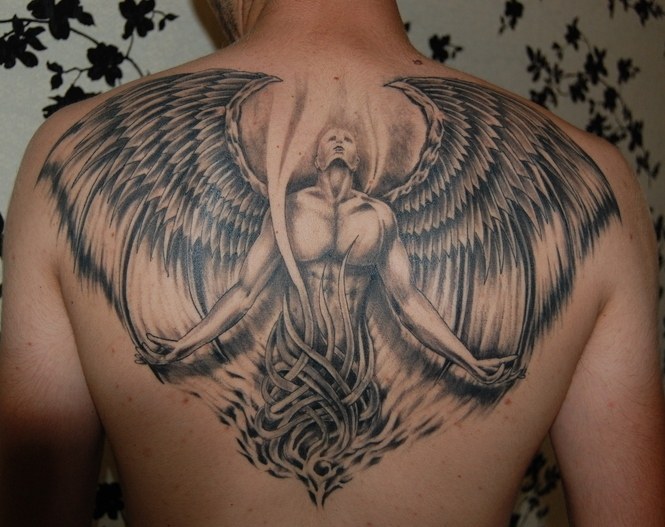 The tattoos of angels

In most cases, tattoos of angels men cause of religious reasons, as a symbol of their faith. This tattoo is the embodiment of a guardian angel guarding and protecting people.

As a protector, or talisman, it is customary to apply body tattoos of angels-children. In the middle ages it was customary to decorate the cathedrals and the Palace square with statues of cherubim. Very popular tattoo small angels girls. The image on the body of the cherubim can also mean innocence, purity of soul of its owner and faith in the most pure love.

Men as a talisman is applied to the body image of the archangels. Archangels are the only angels of higher rank who are supposed to protect from evil forces. So they are often depicted with swords or spears in their hands. These tattoos adorn a man, and make him more manly.

Tattooed praying for each angel carries a special significance. Very often it is applied to the body in memory of a loved one. Appeal to the God of man is often expressed in prayers, so the image of the praying angel reflects the petition to the health of loved ones, the soothing of the soul or the fulfillment of desires.

Today is a very popular tattoo in the form of angelic wings. The wings open on the back signify a spiritual connection with God, spirit and freedom. Omitted, and broken wings can mean a spiritual struggle of man for his religious beliefs.

The image on the body of a fallen angel symbolizes the duplicity, the struggle between two principles — good and evil. Tattoo can be applied as a sign of remorse about his actions that resulted in the loss of a loved one.

Body parts, which usually do a tattoo in the form of an angel

Tattoo of angel on chest usually men do. Location at the heart attached tattoo deep religious significance, devotion to God and sincere faith. Angels on the chest are often made on the memory of the deceased person.

Confident men have an image of angels on the forearm. This tattoo looks very beautiful and courageous. Women prefer to depict the small angels on the shoulder or the scapula. Usually it's little cherubs or angels in the form of a fragile girl with wings.

Image of angel wings on the back is very popular as both men and women. Men usually get tattoos guardian angel with wings, girls represent only the wings. Mens tattoo look brutal, more feminine elegant and gentle.

Girls love putting them on my body fabulous angels, cherubim, or funny little men with horns and wings. These tattoos are very nice on the stomach, leg, foot and even on the neck.

All tattoos of angels mean spirituality, kindness and self-sacrifice. The variety of designs allows you to make your unique tattoo that lays to its owner a special significance.
Is the advice useful?
See also
Подписывайтесь на наш канал