What tattoo means in the form of stars

Tattoos stars are often used, sometimes as part of the background, and sometimes as a separate figure. These tattoos opt for people who want to seem unavailable and mysterious to others. What value do actually have a tattoo of stars? 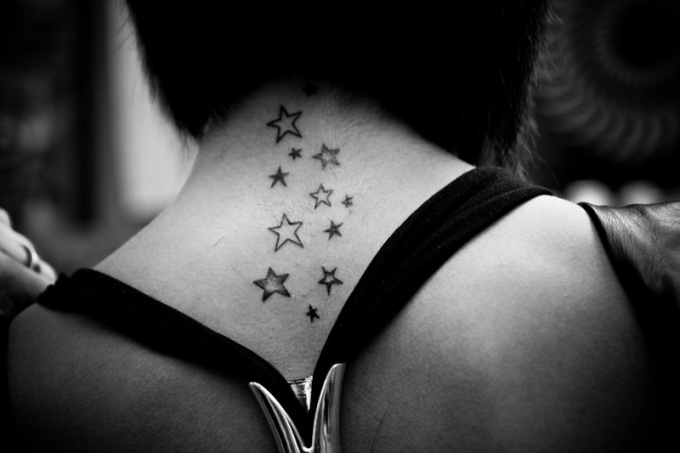 Related articles:
Quite a large number of people choose to Express themselves this type of modern art as a tattoo. Despite the fact that most people prefer to decorate their body more or less individual and unusual pattern, tattoo artists say that there are certain General trends. For example, one of the most common patterns that customers of tattoo parlor ask to put on a particular part of your body – it's all kinds of variations on the theme of stars. What is the meaning of tattooed stars?

What does a tattoo of a five-pointed star

Star with five rays, the ends of which are removed from its center the same distance or, on the contrary, with asymmetrical rays – the most common kind of stars tattoos. Such stars symbolize wealth, prosperity and fortune that accompany a person with such a tattoo, as well as its special status. In some cultures, this symbol represents protection from above, which ensures the safety of the person on whose body it is applied. Other values such stars are five senses: health, strength and harmony as well as balance of male and female.

Five-pointed stars are used in tattoos as independent characters, and as part of a design pattern – often on a mystical theme. This is due to the fact that one of the values of such a star – unconditional victory of the spiritual over the material.

The six-pointed star most commonly found in tattoo art is a religious Jewish symbol "Star of David" (sometimes also called "Seal of Solomon"), which is depicted on the flag of Israel. The meaning of this symbol – the total sovereignty of God over the entire planet. Its other meaning is a harmonious combination of matter and spirit. Despite the fact that Judaism does not approve of tattooing on the body, millions of people around the world have decorated their bodies this religious symbol.

Tattoo in the form of a seven pointed star

The seven-pointed star known as the Star elves and magicians" is the ancient religious symbol of the East. This symbol is considered as their mascot and put on their bodies mystically-minded people who believe the number 7 is magic and believe that it brings happiness. Maybe this number is really special – remember the seven days of the week, seven colors of the rainbow, seven wonders of the world, finally.

There is an assumption that the pattern of the seven pointed star printed on the skin, contributes to the development of that occult powers. So this tattoo is often found in those people who call themselves magicians and clairvoyants.
Is the advice useful?
See also
Подписывайтесь на наш канал