What does a tattoo of a cross

The cross is undoubtedly one of the most interesting, ancient and universal symbols for application to the body. He was tatuirovki since the days of antiquity. In addition, this symbol used in many cultures and religions. The value of a tattoo with a cross is totally different. 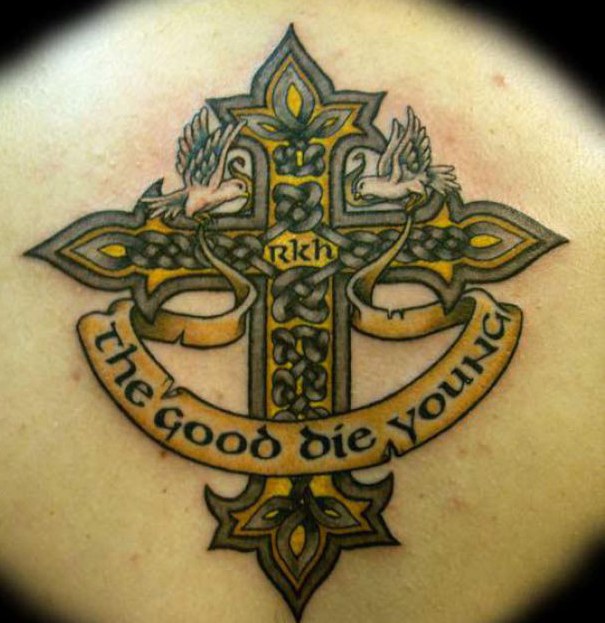 The total value of the cross, tattooed on his body

Tattoos of this nature require a special approach. The fact that the cross is a religious symbol, and therefore endowed with special sacred meaning. Cross tattoo can represent different sides of one entity: on the one hand, pinned the cross – faith in God's protection and harmony of his soul, and on the other the personification of redemption and suffering.

These tattoos are popular at all times. Most people, causing them on your body, emphasize its relationship with religion and spirituality. By the way, often this tattoo improve, adding to the cross the image of Jesus Christ. And yet, the people who are planning to put on your body is a tattoo, you should remember the saying: "to Carry the heavy cross". Before pinned on the shoulder, arm or back cross, it is necessary to weigh all "for" and "against".

What does the tattoo in the form of a Maltese cross?

Called the Maltese eight-pointed cross, which took its origin from the coat of arms of one of the Italian cities of Amalfi. The fact that in the XII century it symbolized the order of St. I. of Jerusalem. After some time, the members of this organization have started to wear a black cloak with a white eight-pointed cross. At that time he represented the following knightly virtues: faith and truth, justice and mercy, humility and patience, sincerity and mezhrechye. Through the centuries – in the sixteenth century, this organization settled on Malta. Hence the name of the cross.

In modern world of tattoo with Maltese cross, with strong demand among young boys and men. The fact that tattoo called "the Maltese cross represents courage, honor and sacrifice. Ideally, it is well suited for those men whose lives are connected with a certain risk: rescuers, firefighters, soldiers, police, etc.

The meaning of the tattoos with a Celtic cross

The Celtic cross is perhaps one of the most popular tattoos in the list. Interest in this tattoo originates in the XX century, when many people began to get acquainted with Celtic art. The fact that the patterns of this theme is so beautiful that just mesmerized by the sight. The special effect on this tattoo had converted to Christianity and Anglo-Saxon culture. It is their entanglement and has stimulated hitherto unprecedented new style. Since that time, Celtic tattoo combines both the Egyptian and the German notes, as well as elements of Latin art.

Modern Celtic tattoo need, most likely, to reflect the reverence of the art, rather than faith in God. For now, the design of the tattoo in General can be stylized pictures on the cross, reflect the daily life or the elements of fairy tale folklore. Here you can use such motifs as vegetation or animals, woven into a cross (for example, snake and rose).
Is the advice useful?
See also
Присоединяйтесь к нам
New advices