"Aspasvit" is one of the commercial names of the sugar substitute "Aspartame", which was created in the mid-twentieth century in the USA. This sweetener has a number of negative properties, which can cause irreparable damage to human health. 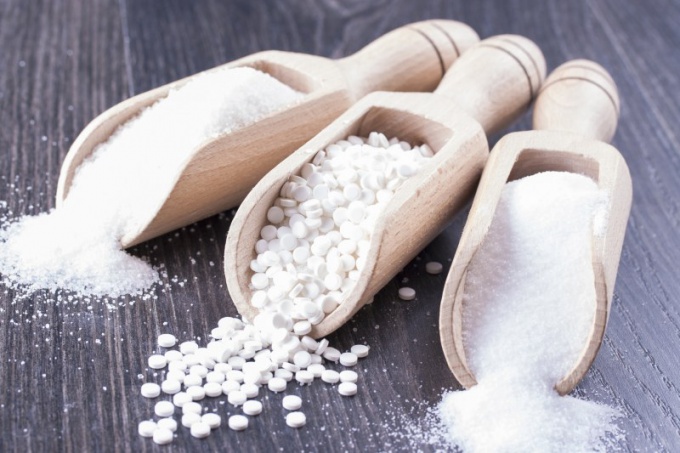 The properties of a substitute

"Aspasvit" ("Aspartame" or E951) is an artificial sweetener approximately 200 times sweeter than sugar. This substitute is one of the most popular in the world – it contains about 25% of the products that are created using sweeteners. Just substitute applies approximately 5500 products, which today can be found in stores.

"Aspartame" is destroyed at a temperature of 80 degrees and unsuitable for use in products that undergo heat treatment. When injected into the human body "Aspasvit" breaks down into amino acids and methanol. Amino acids are often useful to the body, and methanol in turn can cause intoxication of the organism.

The harm of this sweetener is based on the action of methanol, which has a destructive effect on the body. Substance reduces serotonin levels that can affect human health. Some researchers have noted the imbalance of amino acids in the body in people who frequently consume this sweetener. Some scientists the results of their research show that large quantities of "Aspasvit" can cause damage to nerve cells and even Alzheimer's disease. One of the features of "Aspartame" is its ability to create diketopiperazine, which is inherently carcinogenic, and formaldehyde substance.

To date, there is no credible research that would indicate the harm or benefit of "Aspartame". However, in 1992 the US air force has banned the use of products that contain "Aspasvit", its pilots, as it was noticed the negative effect on the ability to control the vehicle. It was found experimentally that after taking 2 cups of hot chocolate with sweetener pilots have problems with vision. As a result, they can not read correctly the readings that could be critical during landing of the aircraft. Also "Aspartame" is contraindicated in patients with phenylketonuria, because the sweetener was composed of phenylalanine.

Among other effects Aspasvit" there is increased appetite, uncontrolled growth of blood sugar (dangerous for diabetics). It is impossible to use "Aspartame" in pregnancy. It should be noted that the use of beverages with Aspartame" does not quench thirst, as a sweetener hard is removed from the mucous membrane of the mouth, causing the desire to remove an unpleasant feeling of another portion of the drink.
Is the advice useful?
Присоединяйтесь к нам
New advices