Why start low when you sprint more effective than high

The sprint is different because it requires to develop the maximum speed in a short period of time. Here, every fraction of a second, because any delay reduces the chances of winning. From the outset to provide a high rate of movement, sprinters use so-called slow start. 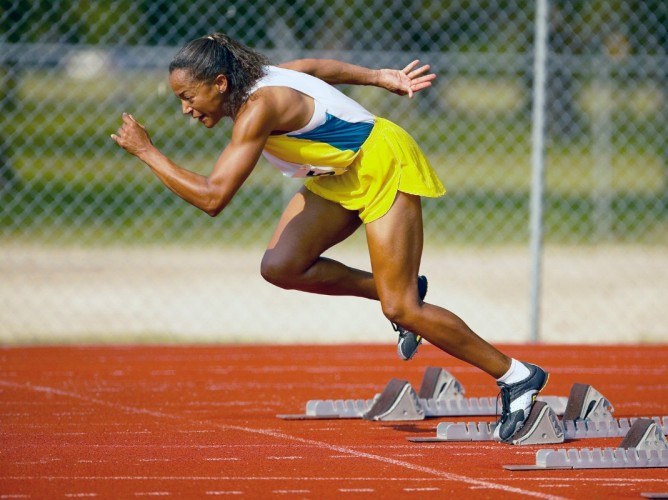 What determines the effectiveness of the low start in the sprint

Start a sprinting lays the Foundation for the most effective flow range. The athlete performs the acceleration already in the first steps. It is in the initial stage of running, it is important to give yourself an advantage in speed.

Experienced sprinters spend a lot of time working out the initial phase of running, achieving fast convergence from the start line.

At the dawn of athletics, widespread high start in which the body of the athlete is almost vertically. Sometimes, to increase the initial speed used a variety of tricks. For example, runners tried to rely on a stick or picked up small stones. Already in ancient times, athletes used to emphasis at the start of the stone slabs.

A slow start has become a practice sprint runs only in the late nineteenth century. Today this technique is considered the standard, because its advantages are obvious. This kind of start gives the opportunity to immediately start Jogging at a fast pace and in a short period to develop the maximum possible speed.

The effectiveness of the low start is determined by the fact that at the time of toe off the starting line, the center of gravity of the runner is already way ahead of the fulcrum. Of particular importance is the correct statement of the feet. Being at an acute angle to the path, the legs of a Sprinter and provides the most repulsive force, which at high start to achieve at all desire is impossible.

When using low start used the so-called starting blocks, which are mounted at different distances from the starting line. Reference sites have pads so that they were tilted relative to the surface of the treadmill at a certain angle.

Properly fitted pads in an optimal way to stretch the gastrocnemius muscle, which increases the speed of repulsion and strength in the moment of separation.

After receiving the message about preparing to start, the Sprinter sets the feet on the pads while relying on hand. While Jogging the foot is placed on the pad, which is located further from the start line, and the flight leg in the middle. The runner then drops to one knee standing in the back legs and puts his hands along the starting line, placing the thumbs inside. Optimally, if the hands will be placed shoulder width apart. Torso before the start of the straight, the head slightly bowed down.

Upon hearing the command "Attention!", Sprinter slightly straightens his legs, raises the pelvis and rests feet to the anchor pad pads, at the same time straining the muscles of the legs. Torso the athlete holds directly, eyes looking down. At the moment the starting gun runner actively pushes off with both feet, detaches from the tracks hands and abruptly brings the body forward, helping itself the movements of the folded hands. This technique allows you to go from the start with maximum speed.
Is the advice useful?
Присоединяйтесь к нам
New advices