How is the Sunday service in the Church

On Sunday in all Orthodox churches committed special divine Liturgy. It holds a special place among all Christian churches. 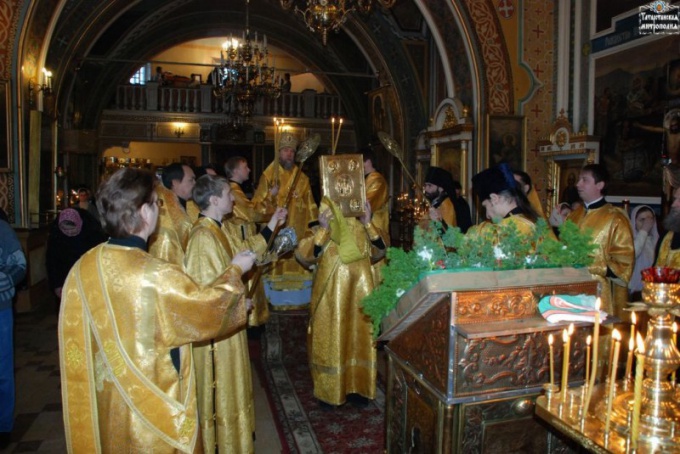 Related articles:
The peculiarity of the divine Liturgy that it is during this service performed the Holy sacrament of the Eucharist (communion). In this sacrament is the essence of Christianity – the restoration of the unity of man with God.

The Liturgy of preparation

The priest and deacon before the closed Royal doors to read the prayers, called "input", then enter the altar, and put on sacred vestments.

The priest performs on five special bread – prosphora – action, symbolizing sacrifice. It was at this time takes place the transubstantiation of wine and bread become the Holy sacrament, the flesh and blood of Christ.

Concluding the Liturgy of preparation, the priest blesses the incense and asks God to bless the Holy Gifts, the bread and wine. All this time the altar is closed and the reader in the choir reads the book of hours.

The Liturgy of the catechumens

Announced called the person taking the reading of the preparation for the Sacrament of baptism, during which he learns the basics of the Christian faith. At present, people were often baptized as infants, so the question of disclosure is not put, but the title of the second part of the Liturgy is preserved. On this part of the Liturgy is allowed to attend all – both baptized and unbaptized.

"Bless, o Lord!" – proclaims the deacon. In response, the priest, remained in the altar, pronounces the words, glorifying the Holy Trinity, which finishes the chorus with "Amen."

The priest prays at the altar, the deacon urges the congregation: "the World pray to the Lord". He then utters the great ectenia, which lists various petitions to God.

The choir sings Psalms and hymns, after which the Royal gates are opened, and the priest and deacon leave the altar through the North entrance, bringing the Holy gospel. It's called "little entrance".

The choir sings a few prayers, then the priest exclaims: "let us attend!" (we listen), and begin reading excerpt from "the acts of the apostles". The priest at this time bypasses the temple, doing the censing. Then the choir sings: "Hallelujah!" and there comes the Central moment of the Liturgy of the catechumens – reading of a fragment from the gospel.

Reading follows the prayer for the living and the dead Christians.

The Liturgy of the catechumens ends with the call of the priest: "Catechumens, depart!"

The Liturgy of the faithful

To be faithful in the Liturgy can only be baptized.

This part of the service starts with reciting a short litany, after which the choir sings the Cherubic hymn". During the singing the priest and the deacon carried the Cup through the North entrance and pray for the Church hierarchs, priests, monks and all present. This is called the "great entrance".

Among the prayers that are heard during the Liturgy of the faithful, particularly two stand out: "the creed" and "Lord's Prayer" ("our father..."). The first of these is a brief summary of the Christian faith, and the second given by the Savior himself. In a sign of special honor these prayers sing not just the choir but the entire congregation with the priest at the head.

The culmination of the Liturgy of the faithful – the communion. First, at the altar partake of the priests, then carried the chalice from the altar, and begins the communion of the parishioners. First to the bowl one the children, then adults. Approaching the bowl, the Christian cross folded arms, partake of the Holy Gifts, and kissing the Cup and then go to the table to take communion diluted wine ("warmth").

Thanks to God for communion, the priest declares the end of the Liturgy with the words: "With the world sidem!", and the choir sings: "Wake the name of the Lord blessed henceforth and for ever".

As a rule, after the divine Liturgy the priest delivers a sermon. It explains in detail the contents of that passage from the gospel, which was read during the service.

Parishioners take turns coming to the priest and kiss the cross which he holds in his hands. After that, the Christians are leaving the Church.
Is the advice useful?
Присоединяйтесь к нам
New advices