Some roses are called tea

Tea rose is one of the most beautiful varieties. Its name is, according to one hypothesis, is obliged to the wonderful aroma, which felt obvious notes of freshly brewed black tea. According to another hypothesis, the name was given because of the shape of the buds, resembling the shape of Chinese tea cups. However, like most in this rose is not only a wonderful aroma and beautiful shape of the buds, but challenging game of shades of color on her petals. 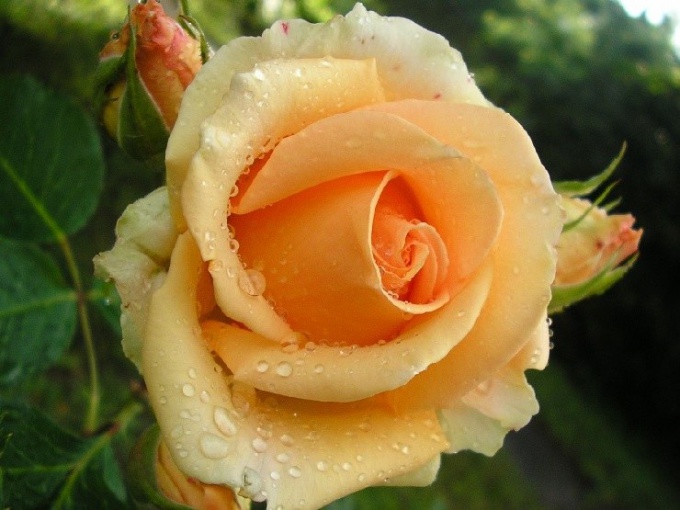 The types of tea roses

This variety was brought to Europe from China in the XVIII century and immediately attracted the attention of growers and breeders. Despite the fact that the tea rose is quite capricious in care, the results of the labors for its cultivation are the real prize, which you get to admire her beautiful flowers. Some of its species as a result of hard and long selection work have become less sensitive to cold and many species of pests it is not terrible. This hybrid tea varieties, which can, with some effort, to grow even under comfortable climatic conditions. Therefore, the hybrid tea rose can be seen in suburban areas and in Central Russia and even in Siberia, however, where they can grow only in a greenhouse.

Popular varieties of tea rose, which can be seen in Russia belong to the hybrid tea varieties and so-called floribunda and grandiflora. View floribunda is the result of crossing hybrid tea and the polyanthus varieties. These roses characterizes mnogovekovoe, but the shape of the buds closer to the tea rose, though more flat, and the aroma is less pronounced. Due to resistance to low temperatures, this species used for landscaping in urban areas.

As a result of crossing tea roses with remontant appeared grade Wienerwald with large buds are salmon-pink in color, whose diameter can reach 10 cm High bushes with thick branches grow well in the trunk, pleasing blooms from early summer until autumn.

The variety La France was launched in 1867, is one of the most favorite varieties among gardeners. Resistant to cold and an abundance of beautiful buds with a great aroma. Doris Testerman no different shimmering shades, but in and of itself a rich orange color large buds of this variety are wonderful, and the dark green leaves looks great. For hybrid tea and apply two-tone varieties of Kordes Perfecta. At the base of the flower petals have a pale cream color, and the edges are dark red.

Of the subspecies floribunda belongs to the popular white and cream Edelweiss and bright red variety Montana. These varieties are characterized by abundant and repeated flowering is very good in hedges.
Is the advice useful?
See also
Присоединяйтесь к нам
New advices