Chinese rose - the flower of death

Chinese rose is a showy and beautiful plant. This flower has many names: hibiscus, red sorrel, mallow Venice, okra, hibiscus, rose of Sharon. Different peoples perception of it is different. In Haiti it is considered a symbol of beauty, In India it is woven into Bridal wreaths, Malaysia is the national flower, but because girls decorate their hair. But in some countries there is a belief that the Chinese rose – the flower of death. 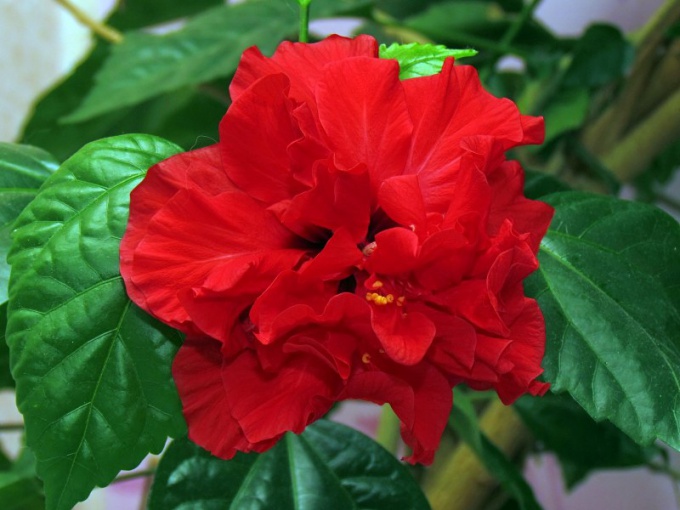 What kind of flower is China rose?

Already in the XVIII century Botanic gardens of Europe were decorated with the hibiscus. Is to say that exotic look of these colours in various shades with Golden stamens fused attracts attention and fascinates. Such plants are able to reach a diameter of 15-16 inches.

At home Chinese rose can grow up to 2 meters in height, this flower can live for about 30 years.

Chinese rose even in photos, looks adorable, and seeing her up close for once, it's hard not to fall in love with this beautiful flower. This is why many growers don't want to deny myself the pleasure to have a home such a plant. Under favorable lighting conditions hibiscus will delight with their blooms almost all year round.

Why Chinese rose is called the flower of death

Studying the signs associated with the Chinese rose, you can conclude that its name is "flower of death" appeared for a reason.
According to some beliefs, when flowering hibiscus becomes a source of negative energy, which adversely affects human health. That is why in some sources the Chinese rose referred to as the "Burnet".

The color of Chinese rose is the shade of red that resembles blood. However, there are other colors: purple, white, pink, yellow, not only blue and black.

The people believed that hibiscus can cause health issues of its owner, but also to hasten his death. Based on this, experts in the field of extrasensory perception are strongly recommended to get rid of such a flower by its burning.

According to another version, this flower does not affect the health and lives of their owners, and is a kind of indicator that informs their owners about approaching misfortune. For example, if China rose unexpectedly dropped leaves, it may indicate that someone in the household is seriously ill, even if there is no hint of illness.

If you believe the signs, Chinese rose has both positive and negative qualities. For unmarried girls it will attract many suitors but the happiness of a family she does not contribute, but because the hibiscus is also called "mojigangas". Creating around itself a negative aura, Chinese rose sows discord between the spouses and wanton aggression. According to one version, a woman who has such a mystical plant that is doomed to an unhappy family life. It's no wonder the Chinese rose used in magical rituals to restore the crown of celibacy. [box#3]

However, it should be clarified that it is just superstitions that don't have reliable evidence. Some firmly believe in such superstitions, others only smile. It all depends on your attitude. If you are self-confident man devoid of any prejudices, indulge in this amazing flower is. If you believe in superstitions and share some doubts still arise, it is better to purchase another flower, which will delight you.

Remember, each flower is beautiful in its own way, and if you take care properly, he also will love you and bring only joy!
Is the advice useful?
See also
Подписывайтесь на наш канал