""Grindeks "" - it is a drug that is prescribed for increasing the supply of cells and tissues. The drug improves metabolism, promotes the excretion of toxins and protects cells from damage. 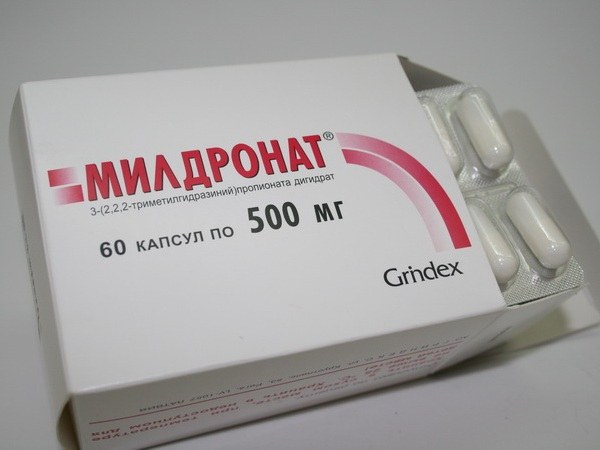 Instructions for use of "Mildronate"

"Mildronate" prescribed in combination with other drugs for the treatment of ischemic heart disease (including angina and myocardial infarction), congestive heart failure, in stroke, cerebrovascular insufficiency. The drug is also used with reduced work capacity, physical and mental strain, hemorrhages in the retina, the abstinence syndrome. "Inflammation" increases the body's ability to withstand different loads and quickly after they recover. In patients with heart failure drug reduces the frequency of angina, improves myocardial contractility.

The active ingredient of "Mildronate", Meldonium.

When cardialgia of "Mildronate" you need to take 250 milligrams twice a day for 12 days. For the treatment of cardiovascular diseases, the tool is used in complex therapy of his drink 0.5-1 g two times a day for four to six weeks. In chronic circulatory disorders in the brain administered at 500 mg per day for four to six weeks. A course of medication may be administered several times a year.

In the acute phase of cerebrovascular disorders "Mildronate" applied intravenously at 500 milligrams once a day for ten days. After that, the pill of the drug, 0,5-1 grams a day. The treatment should last up to six weeks. During increased physical or mental stress you need to take one tablet of the drug up to four times a day for two weeks. Two weeks can pass repeated course. When withdrawal syndrome take one tablet of "Mildronate" four times a day for ten days.

"Mildronate" contraindicated in children and adolescents under 18 years of age, an increase in intracranial pressure, including dysfunction of the venous outflow of the tumor, with hypersensitivity to the drug. It is not recommended to use during pregnancy and lactation. With caution the preparation is used simultaneously with some antihypertensive and antianginal drugs, cardiac glycosides, since "inflammation" is able to potentiate their action.

With careful use of "Mildronate" in diseases of the kidneys and liver.

For reviews of "Mildronate" does not cause hazardous side effects. In rare cases, there may be changes in pressure, dyspepsia, tachycardia, psychomotor agitation. "Mildronate" for reviews can cause allergic reactions: swelling, rash, itching, redness.
Is the advice useful?
Подписывайтесь на наш канал