How to connect the capacitors

Capacitors can be connected either in series or in parallel. The resulting capacity in both cases are calculated according to formulas. This connection is used in cases where there are no capacitors with the required parameters, but there are others. 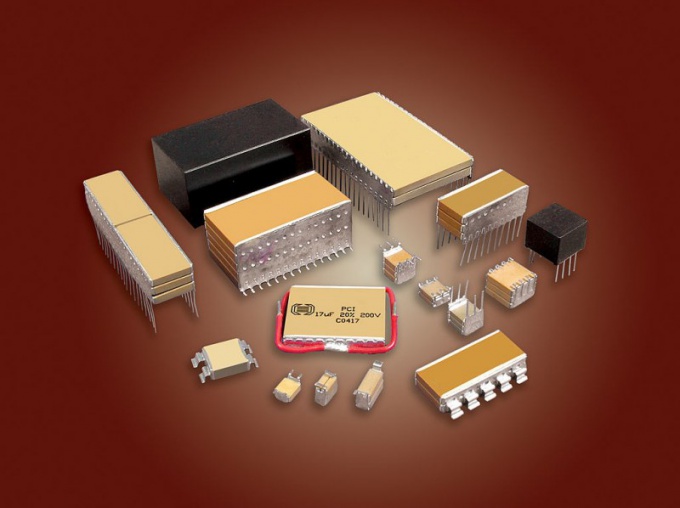 Related articles:
You will need
Instruction
1
Any capacitors can be connected only when they are discharged and are disconnected from other circuit elements. Do not discharge them short circuit - use a suitable load. Use insulated wires without touching live parts. Discharging the capacitor, check with a voltmeter that it really is discharged using the test leads with insulated wires and handles and not touching live parts.
2
Before the calculation of the capacitors should be converted to the same units. In this case, use of the SI system is not rational, as part of her unit - Farad is very large. Depending on what capacitors you connect, you can use picofarads, nanofarads or microfarads.
3
Connecting capacitors in parallel, the resultant capacity calculate just summing the capacity of all capacitors. The working voltage of this design is equal to the lowest of the voltages of its constituent capacitors.
4
A series connection of capacitors to first find the inverse capacitance of each, then fold these values, and then find the inverse value. The reciprocal is called the result divided by the number. This looks so: Result=1/(1/C1+1/C2+ ... +1/SP), where Result - the resulting capacitance, C1...Cn - capacitors in a sequential chain. With a working voltage of this design is more complicated. In theory, a series connection of capacitors of the same capacity, it is sufficient to lay down their working voltage, but if their capacities are different, the voltage distribution on them is inversely proportional to the tanks. In practice, the variation and leakage can lead to unpredictable stress distribution. Therefore, it is safest to follow the same rule as that at parallel connection: operating voltage of the whole structure equal to the working voltage of that capacitor, which it is smallest.
5
Mixed (series-parallel) connection of capacitors, separate design group of the capacitors connected only in series or only in parallel. Calculate the parameters of each group, and then treat it as a single capacitor with the appropriate parameters. Then see how connected these groups are in series or in parallel and produce the appropriate formula for the calculation of the parameters of the whole structure. Polar capacitors, connect in same polarity and the same polarity include the design of the scheme, where it will work. Connect the counter-consistently, the two polar capacitor of the same capacity for obtaining non-polar is not recommended - the variation and leakage can lead to their failure. At least one polar capacitor polar makes the entire structure.
6
Sometimes electrolytic capacitors shunt (connecting in parallel) ceramic a much smaller capacity. In this case, to consider that any formula is not necessary, because the addition of capacitance can be neglected. And doing so is not to increase capacity, and to filter high frequency noise which is not removed by the electrolytic capacitor because of the parasitic inductance.
Is the advice useful?
See also
Присоединяйтесь к нам
New advices