How much energy is in lightning

Lightning has long been troubled and frightened people with its unpredictability, beauty and terrible destructive power. As soon as it became clear the electrical nature of this phenomenon, the question arose whether it was possible to "catch" and use it for peaceful purposes, and, in General, how much energy is in one lightning. 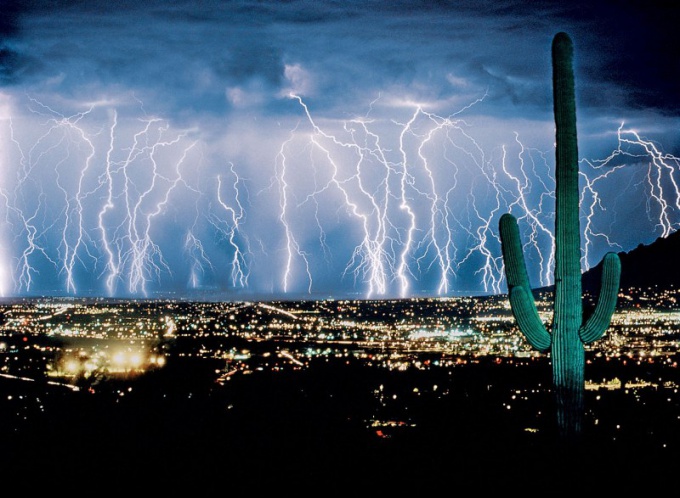 The calculation of the energy of lightning

Is it possible to tame the lightning?

The average frequency of lightning strikes in Russia - about 2-4 per square kilometer. Given that thunderstorms occur everywhere, for their "trap" will require a large amount of lightning rods. As energy source can only be considered a discharge between the charged cloud and the ground.

For the collection of electricity will also need a high-voltage large capacitors, transformers, stabilizing voltage. Such equipment is quite expensive, and there have been several calculations demonstrating the inefficiency and unprofitability of such method of obtaining energy.

The reason for low efficiency lies primarily in the nature of lightning: when the spark discharge most of the energy is spent on heating of the air and the lightning rod. In addition, the station will operate only in the summer, and even then not every day.

The riddle of ball lightning

Sometimes during a thunderstorm appears unusual ball lightning. It glows brightly or dimly, on average, as a 100-watt bulb and has a yellowish or reddish hue, slow moving, often flies into the room. The size of the sphere or of an ellipse varies from a few centimeters to 2-3 meters, but the average is 15-30 cm

Despite a careful study of this phenomenon, its nature is still not clear. During a thunderstorm, people and objects are charged positively, and the fact that the fireball passes them by, talking about its positive charge. To the negatively charged items she is attracted and may even explode.

Ball lightning appears due to the energy of a conventional zipper, on the spot of its fracture, of a split or at the point of impact. There are two hypotheses of its physical nature: the first is that it gets energy from the outside constantly and due to this it lives for some time. Proponents of the hypothesis believe that the lightning becomes an independent entity after the occurrence and maintains shape due to the resulting from an ordinary lightning energy. To calculate the energy of ball lightning could not be anyone else.
Is the advice useful?
See also
Подписывайтесь на наш канал