What kind of injured Messi

A stellar ten-year career striker of the national team of Argentina, four-time holder of the title best player in the world (2009-2012) Lionel Messi in the Spanish super club Barcelona may soon come to an end. For two good reasons. First — a better offer from another rich European club. A second severe leg injury, because of which Messi was out of action long before the end of 2013. 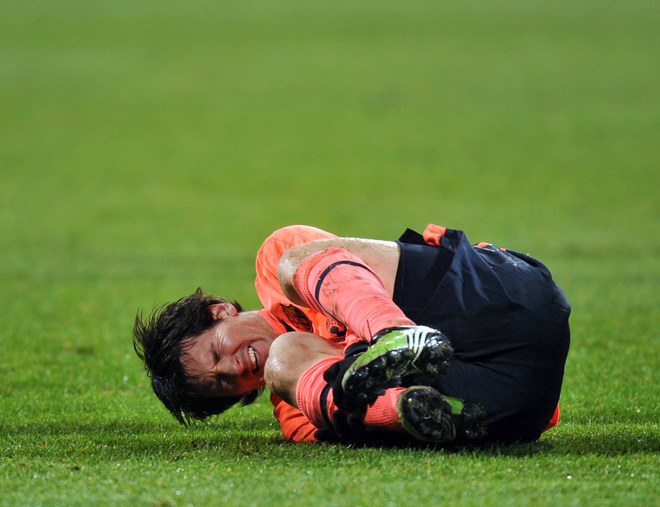 It is called "the Messiah"

The captain of Argentina Lionel Messi (left foot which probably closely or almost now the whole football world) is the most decorated and famous football player of the world. After all, his track record includes not only four consecutive prize for the best player in the world by the end of the calendar year called the "Golden ball", but also many other honorary titles and awards.


Lionel, for his game and achievements on the field long received an honorary nickname "the Football Messiah" is, in particular, the gold medalist of the Olympic games in 2008, a three-time winner of the Champions League, the winner of the world championship among clubs. And how many goalkeepers he managed to score and dream then a nightmare, and it is terrible for them statistics.

How many injuries Messi?

The exact number of injuries that can get in and get out for the career of any professional footballer, accounting, as a rule, not be. Indeed, apart from open injuries, there are also so-called hidden up to a point invisible. According to sports doctors, there may be several dozen, and the end to his career and ability to earn money with his play on the field is able to put only one of them.


That is another one of those injuries because of which Messi, according to estimates by the Spanish journalists who missed almost a calendar year, questioned the possibility of continuing Lionel appearances for the Catalan club. By the way, ironically, she became his 13th in a row.

"Baker's dozen" is the number of severe injuries in games for Barcelona and the Argentina national team, forced the best player in the world not only to finish ahead of 2013, but also to think about changing club and country.

In particular, in 2006, Messi was forced out of action three times: after playing with Atletico Madrid, Chelsea (hamstring tendon right foot) and another Spanish team — "Zaragoza" (the fracture of the fifth metatarsal of the left foot).


In 2007, Messi injured in games against the Australian national team (injured right knee) and Valencia (torn hamstring). In 2008, the injury was sustained in the game with Scottish Celtic (muscle strain left hip).

In 2010, the best player in the world again injured in the game against atlético (ankle). In 2012 is a critical match against Portuguese "Benfica" (bruised right knee). But the most unfortunate for Lionel becomes 2013 with a string of injuries of varying severity. Here is a brief chronicle of this year in which Lionel, by the way, played 11 matches, scoring eight goals and making four assists:


Finally, on 10 November, in the game of the championship of Spain "Barcelona" — "real of Betis" (Sevilla) should damage to the biceps femoris muscle of the left leg, after which it became clear following the game, the Messiah will hold only in 2014. And, perhaps, not in "bars" not long ago acquired the Brazilian Neymar, who will earn much more than it receives in it forever injured Messi.

How many goals scored by new South American striker to the Catalans, naturally, no one knows. But the bosses sure are young and full of strength and health Neymar will be a full replacement "crystal" Messi.

While Lionel Messi was treating another injury, the leadership of "Barcelona" has acquired him to replace the rising Brazilian star Neymar, which undertook to pay 17 million euros per year.

As evidenced by one of the most authoritative Spanish journalists Francois Gallardo, Messi is already a preliminary agreement on the transition in another great European club where Lionel might not be injured as often as in Barcelona.
Is the advice useful?
Подписывайтесь на наш канал