How many goals in his entire career scored Messi

Each output of this player on the field is expected by millions of fans. Every kick of the ball is perceived as the flight of man into space. Every goal savored and discussed in all possible and impossible details. His name is Lionel Messi, he scores in the football team "Barcelona". 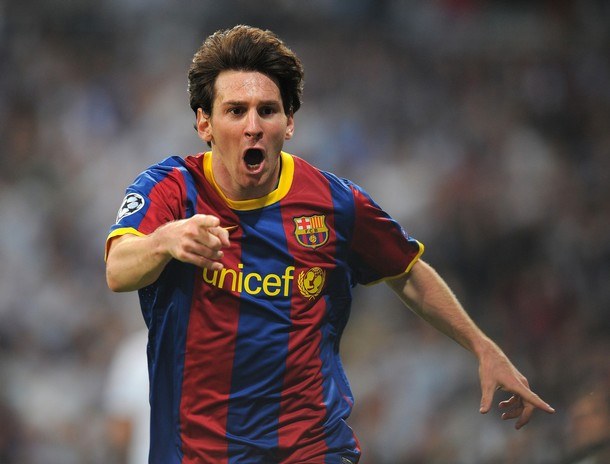 His stellar career, the current best scorer on the planet Lionel Messi started in Argentina's "Newells old boys", where in 13 years, thanks to breeding talent sports Director of "Barcelona" Carles Rexach, moved to the European continent, the football school of the famous Spanish club. In Barcelona 17-year-old Argentinian scored the first of many hundreds of professional goals.

For the first time on the field Barcelona's camp Nou stadium, Messi came in the fall of 2004, after spending 9 minutes in a duel against fellow countrymen from "Hispaniola". On the scoreboard the name of the South American talent "lit" may 1, 2005 — Gol Albacete. Having distinguished himself at the age of 17 years, 10 months and 7 days, Messi was the youngest goalscorer in the history of the team from Catalonia.

A debut match in Barcelona nothing special for Messi marked was not there. 16 Oct 2004, for the first 9 minutes before the end of winning the Derby against Espanyol, he replaced the Portuguese player Deco. But then a goal scored.

His debut goal in the Champions League South American Junior recorded a score of 2 November 2005, hitting the gate of the Greek team Panathinaikos. And the official ball of # 1 in the form of the national team of Argentina held during the 2006 FIFA world Cup, taking part in the defeat of the national team of Serbia and Montenegro.

Over the next eight years Messi for his diminutive stature nicknamed "the flea", scored... by the Way, how bad is that?


Alas, the exact statistics of goals, sent the "Flea" in the gate of opponents in the League and the Spanish Cup, the Champions League and the national team of Argentina, in the nature, apparently, does not exist. Different sources name different number of them.


According to one of them, on 1 January 2014 in the asset Messi was 453 ball. Most of them - 367 - he scored playing for Barcelona (340 of them in official games). 37 times the striker scored in the matches for the Argentine national team, whose captain Lionel is now and soon will go for medals on the world Cup in Brazil. How many, I wonder, goalkeepers have sorry to get the balls from the nets of the gate?

In the Argentina national team Lionel Messi scored 37 times, and the achievement of the heir to the glory of Diego Maradona is not going to. Plans Lionel gold medal of the world Cup in Brazil.

And here's another source football website BestGoal.tv, estimated that in the asset Messi scoring at the same time, was listed "only" 366 balls, 329 of which he spent playing in the form of "Barcelona".

Messi is head and goal!

As you know, the trauma for those who can score — not a hindrance. And to the figures named above, you need to add scorers to have recovered from the severe injuries Messi in January-March 2014.


After his recovery, playing for Barca in all competitions with her participation — the League and the domestic Cup, the Champions League, — Messi struck 14 more punches. Thus, as of 9 March 2014, his scoring register must record 467 balls. Of them in Barcelona — 381 (354 in official matches).


Well, to paraphrase a famous expression of the writers Ilf and Petrov, is with respect to say: "Messi is head!". Although the main "working tool" for poor Lionel is rather his famous left foot.

Breaking numerous goal-scoring record, Lionel Messi is ready to aim at a new club. After recently scoring a "real Sociedad" and almería, Messi brought their own scoring balance in the League to 230 balls. Thus, he is two goals ahead of the former Spain international striker Raul came in third position in the conditional race scorers in La Liga of all time. Ahead of Messi in it only for the Mexican Hugo Sanchez (234 goals) and Spaniard Telmo Sarah (251).

If remaining to the finish line Examples-2014 eleven games Messi manage to score 22 goals, he will be able to beat the record of the forward of "Athletics" Telmo Sarah, becoming the most productive scorer of the tournament for the entire period of the event.

However, according to Spanish newspaper El Confidential, Messi, whose contract with the club, in fact, valid for another 4.5 years, has been invited by the French "Paris Saint-Germain" and English "Manchester city". The latter, according to the newspaper, offers to Barcelona for 200 million euros, and Argentine striker is 25 million, but a year.
Is the advice useful?
Присоединяйтесь к нам
New advices