With various injuries people encounter throughout life on a regular basis. However, all to different degrees: someone's nothing worse than the usual cuts are not seen as someone who regularly breaks his hands, then his feet. If getting one person a serious injury happens before another, the latter usually lost and does not know what to do. Doctors argue that once the right is given help, often depends on the rest of the course of the disease and its outcome. 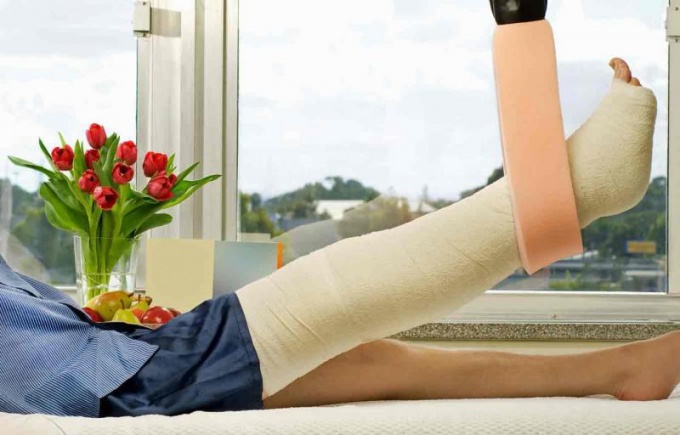 Related articles:
First aid for injuries still need to be able to provide. To promote literacy, the doctors suggested a series of recommendations, doing that can assist to ease the injured person's condition.

The most common injuries are fractures, bruises and sprains. Moreover, often to distinguish them from each other is quite problematic. So you should know what to do if you see a person with suspicion for this injury.


The main rule is not to panic. You are a doctor and you do not need anything supernatural. All that can be done to alleviate the suffering of a man you are quite capable.

Most often, according to statistics, people hurt limb. And the leader in this kind of charts are the legs.

A fracture, usually characterized by fairly severe pain at the site of injury of the limb. Of course, if we are talking about an open form, there are specific questions arise – a fracture or not. If the trauma is not visible, to draw conclusions quite problematic.

The first recommendation is to call the doctor. And make it a must, not trying to independently move a patient to take him to the hospital. After all, if a person has a fracture, you can the awkward movements only aggravate the situation.

Next you need to immobilize the affected limb. Again, in order not to hurt. Foot position should be comfortable and calm.

Fixation of the limb helps to relieve pain and prevent the transition of a closed fracture to an open one.

Of course, you should not experiment and try to straighten the injured limb themselves. And that's all you can do for a person who has a suspected fracture. The maximum that you can add is give him painkillers.

If a person has an open fracture, it is necessary still further to treat the wound with iodine or green paint. Alternatively, suitable and alcohol. This is necessary in order to prevent blood poisoning. It is also worth to make a bandage that will stop bleeding. After all, if bleeding much, there is a risk that the patient might not survive until the ambulance arrives. To reduce pain in this situation will help the ice or another cold.

If it is not possible to call an ambulance, have the person transported to the hospital yourself. In this situation you will have to make the bus. You can use any solid surface – a lot of boards, cardboard, wide stick, etc., Apply a splint you need at least 2 joint and only on the skin and not on the open part of the fracture. The bus must be securely fastened – it is better if you tie the limb to a healthy one.

Dislocation – injury is less dangerous than a fracture. However, in this case, the person needs to be sure that he was given first aid. To act in this situation need as well as at fracture – immobilize the limb. Dislocation do not try to straighten themselves. First, you can only aggravate the situation. Secondly, it can be complicated by the appearance of cracks in the bone.

Doctors recommend to give the affected person a pain reliever and apply ice or another cold substance to the affected joint. Especially if the leg began to swell. This will help to relieve the pain. If there is no possibility to call an ambulance, you must also apply a bandage or splint, and take the victim to the hospital.

A bruise is an injury to the soft tissues of the body without any serious damage. Injury occurs usually during a fall or when struck by any blunt object. That he was the one who indicates pain in the limb, the appearance of hematomas and edema.

Despite the fact that the injury is not as serious as the first two, first aid is still needed to provide, because we cannot be fully confident that under it hides a dislocation or fracture. The hospital will have to apply to the case if the person there is pain, that becomes stronger when trying to move, and also blue hurt.
Is the advice useful?
See also
Присоединяйтесь к нам
New advices