How much is the guitar

There are many types and kinds of guitars. The most common models are descended from the Spanish six-string guitar and repeat its operation, design and methods of sound production. The cost of each model depends on several factors – where the party produced, in what quantity, quality, materials, etc. 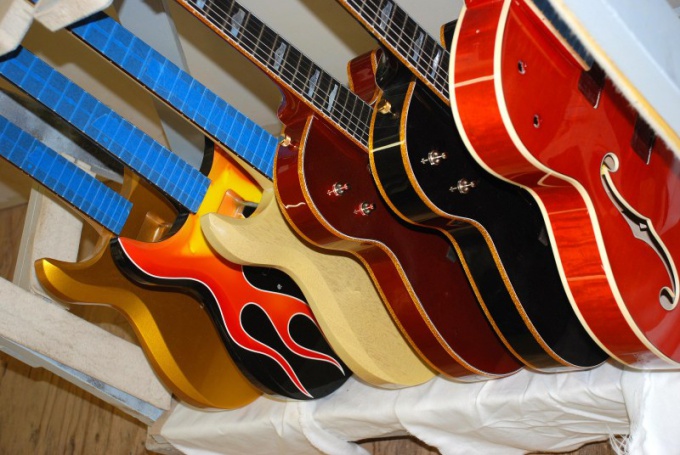 Most similar to Spanish guitar classic. On her fretboard no dots marking the frets, the strings are made from nylon, on pins wearing special caps made of plastic or bone, allowing for a more gradual set of nylon strings. The cost of the classical guitar varies from the materials from which it is made, country of manufacture, and serial if a tool or piece-work of a master. Simple serial classical guitar with a plywood body, assembled in China or Southeast Asia, can cost less than 2 thousand rubles, while the more tools collected for virtuoso musicians or collectors for individual orders and much more. How much exactly? Sometimes their cost exceeds tens of thousands of euros. Chinese used classical guitar you can buy with it for five hundred rubles. But the quality will be appropriate.

Guitar-dreadnought, also known as country and Western, different from the classical long scale, fret markers, dots, trapezoids, or other shapes, metal strings fixed to the lower nut special pins, pegs of metal, often built into the headstock perpendicular to the loud ringing sound with a predominance of high frequencies (depends on the material from which made the strings). The cost of the dreadnoughts is also diverse and depends on the same reasons that determine the price of classical guitars. The most inexpensive varieties of dreadnoughts are 2-3 thousand rubles. Serial tool large manufacturer – from 15 thousand to 2-3 million euros. The price of single-piece tools can reach dizzying heights, but the opportunity to produce a professional tool to fit your needs is worth it.

Not too different from the dreadnought Jumbo guitar. With small differences in design, all the factors that determine the final price remain the same. And fits price range.

How much are electric guitars?

Electric guitars are different from acoustic that the sound creates a resonance body of the guitar, and by removal of the vibrating string, a special electromagnetic device is a pickup. There are two main types of pickups – single-coil pickups (single) and humbuckers (double). Singles have better sound with a sharp attack, but more noise Humbuckers designed for noise reduction, but their attack is somewhat "smeared". Quality guitar made of fine well dried wood. Its pickups are wound very carefully, an electronic circuit assembled from quality parts. Cost of such a tool will be a lot, but the sound is excellent.

The cheapest models are assembled in Asia from local poorly dried wood, electronic components are cheap and noisy, the furniture is made of substandard alloys.

Nowadays, you can buy in stores or online normal guitar within a hundred dollars, but the sound and keep the system it will be on its price. Dear American custom tool will cost 50-100 times more. The Golden mean is to buy a used Japanese guitar for 20-30 thousand rubles. Such models can be viewed in the online stores.

Stand Soviet guitar. They were in the bulk is horrifying, they were made of plywood furniture, and the electric guitar of Soviet production was staged it is not suitable for these purposes, domestic potentiometers. Now these tools occasionally come across in advertisements for the sale, but all, except for collectors, of little interest. Acoustic guitar Soviet production can be bought for 300-500 rubles, the electric guitar – from 1000. According to rumors, there were individual instances of sounding good, but over time they became less and less. However, regret it, only collectors.
Is the advice useful?
See also
Подписывайтесь на наш канал