The emblem is a reflection of the power of the state, its historical path and device type. Heraldry very seriously each element used in the symbols of state power. So, some of the characters become obsolete, they are replaced by other, and part of the rise over time in the same way as it happened with the double-headed eagle on the Russian coat of arms. 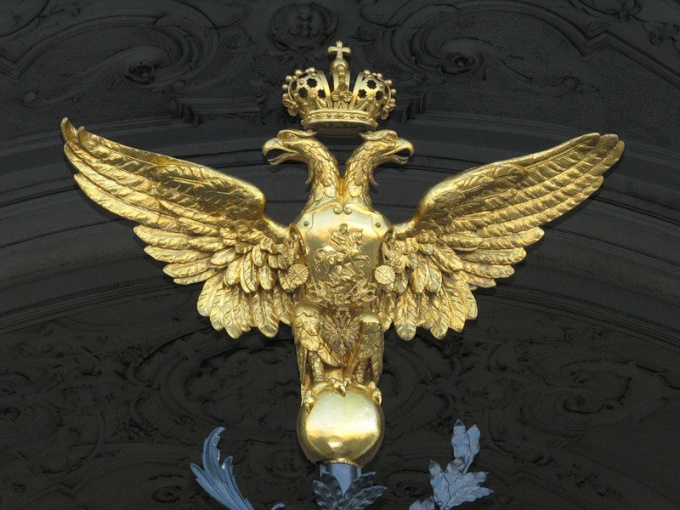 Related articles:
One of the characters has its own characteristics and history, reflecting the power of the modern state, particularly its devices and areas, of course, is the coat of arms. History of the coat of arms of Russia in the form in which it is presented today, begins with the reign of Ivan III.

The appearance of heraldic symbols usually associated with the chivalrous era. The coat of arms is a symbol of-a-kind, its distinctive sign. The uniqueness of the Russian coat of arms that he appeared in such an early historical period in the country who never knew of the knights.

In the 15th century, in addition to the image of St. George on the seal of the king, being at that time the main symbol of power, appears headed eagle. The eagle is a sign of continuity, resulting from the fall of the Byzantine Empire and marked the wedding of the great Russian Tsar with the niece of the Byzantine Emperor.

It is the eagle was meant to symbolize the absolute power of the monarch.

Since then, the emblem was quite a long way and has undergone several important changes. Already in the 16th century the eagle becomes more powerful sounds and is depicted with open beak and tongue, giving it a grown-up and scary.

Later, the eagle takes the crown, topped with an Orthodox cross as a symbol of the many military victories and the great accession of Siberia. Eagle is minted on coins and became an army emblem. After ascending to the throne of Mikhail Romanov, the Russian state enters into relatively calm and stable epoch of its existence, the eagle begins to be depicted with outstretched wings and a triple crown, signifying the Union of fraternal peoples.

The direction for European development in the 17th century began to emphasize appeared in the clutches of the eagle symbols of power: the scepter and Orb.

In the time of Peter the two-headed eagle gave a dark color, and replaced the old-fashioned Royal crown on the symbols of Imperial power. And joining Russia in the Far East gave the eagle biceps a whole new meaning, symbolizing the duality of the state and the distribution of power in the West and more importantly, in an easterly direction.

Since then, the eagle changed tilt heads have gained and lost a variety of symbolism in a variety of coats of arms, shields, chains, helmets and crowns, and even lost its national importance. The revival of the historic symbolism occurred in 1991 and today, despite its relative prevalence in the heraldry of various countries and States, the eagle in the form of a double-headed creature is rare and very uncommon. In the modern sound is powerful, inspiring respect for the creature underlines the gravity and power of the modern state.
Is the advice useful?
See also
Присоединяйтесь к нам
New advices