How to play baldev

Board games help not only great time but also develop logic, intelligence. The game "Balda" in addition to significantly expanding vocabulary. If you have other got free time, play, "Balda", following the rules of the game. 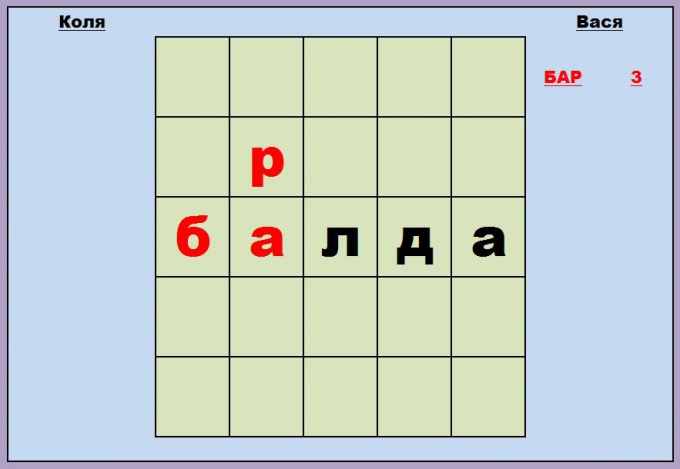 Related articles:
Instruction
1
Playing field "Baldy" is a square with side an odd number of cells, most often 5*5 cells. To participate in the game can only two people, but you can complicate your task, playing multiple pairs, in which 1 player plays on 2 fields. In the middle of the resulting square need to put any words with number of letters equal to the number of cells in the row. The result is an even number of free fields, in which the players will take turns to write the letters. That is, both players are given equal chances. Usually, the main word writes 1 person, and the first word from him is the second.
2
To make progress, you need to finish the letter in the cage top, or bottom from the main words so that you could read a new word. Moreover, you can read in any side, but only horizontally and vertically, without intersecting the letters, with no loss of cells. The word can be broken. However, there is one version of "the Bulldozer", in which players are allowed to make words diagonally. But this is the players need to agree in advance.
3
Words that you can write in the margins, should be well known, exist in the dictionaries. If not, then the player may contact another player with a request that he took him. But only if it is a noun in the nominative case and singular (if the word exists only in the plural, it is also possible, for example, scissors, scales). But the second player has the right to reject the request. The new word must use a letter which the player has placed. In some cases we can agree that if one player cannot make a word or doesn't want, he can supply just the letter and it will be counted 1 point. Speaking of points: 1 letter in the word is equal to 1 point. The winner is the one who will score more of them.
Note
If you're playing, "Balda" online, in these games by clicking on a word to learn its meaning.
Useful advice
Words can not be repeated, even if they are made differently. "E" and "e" and "I" and "d" of the arrangement can be compared to each other.
Is the advice useful?
See also
Присоединяйтесь к нам
New advices