How to determine the azimuth of the map

In order to move the compass, use the map to determine the azimuth. This is true for aircraft and vessels engaged on long flights and swimming. This is true for walkers in poor visibility conditions, at night, when there is no possibility to move along the guide. 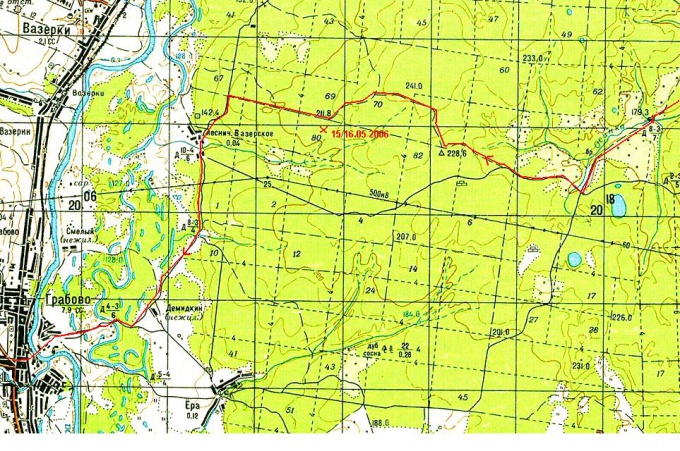 Related articles:
You will need
Instruction
1
The azimuth is the angle between the Meridian location and direction on the subject. It is expressed in degrees from 0 to 360 and rotates clockwise.

To determine the azimuth direction of the object – and maybe the direction of your movement, you need to know your location. Mark it on the map, focusing on the surrounding landmarks, marked on the map.
2
Find the landmark in the direction where you should move. Rectilinear motion in azimuth is possible in the airspace and on the high seas. On land applicable in the open steppe or in the desert.

More often than not, the land is in a broken line, considering the natural obstacles. Therefore, the azimuth in motion will have you periodically adjusted.
3
For azimuth you will need a protractor, preferably a transparent ruler and a pencil. Put a ruler on the map so that the point of your site and the benchmark was on the line, and draw a pencil line to its intersection with the nearest Meridian. Now attach to the Meridian line of the protractor with its base. Bring the Central risk to the intersection with a line drawn by the direction of the landmark. On the arc of the protractor at the intersection of the same line take readings in degrees. This will be the azimuth.
4
In the absence of the protractor you can use the compass using its graduated kartoshku.
5
But that's not all. For example, you the direction to the reference point (azimuth) was 30 degrees. This will be the true azimuth, which usually differs from magnetic. Therefore, orienting your compass is 30 degrees and move in that direction would be wrong.

So find on the map nearest the vicinity of your location remark with a value of magnetic declination. It is expressed in degrees and can be with a sign + and a minus value.

Enter the amendment, and move boldly, guided by the compass.
Note
Azimuth (denoted by "AZ" or "Az") — in surveying, the angle between the direction of the North (in the southern hemisphere — South) and direction on any remote object. Usually measured clockwise.
Useful advice
The azimuth is the angle formed between the direction to the object location and the direction of North. To identify areas in a given azimuth, it is necessary to set the pointer sighting device compass point of division, the corresponding value of a given azimuth; rotate the compass so that the pointer vane was ahead
Is the advice useful?
See also
Подписывайтесь на наш канал