How to win in a street fight

Even if you have a black belt in karate, it does not guarantee you victory in a street fight. A street fight is not a performance in front of judges and audience (as in a sport martial art), and brutal battle. It has no mercy and rules. Rather, one rule is: someone must be a winner and someone a loser.

Unfortunately, the reality today is that no one is safe from collision with street thugs, robbers or hooligans. Attack can happen anywhere and at the most inopportune moment. And then you will have only one of two things: win or lose, no middle ground. And at stake could be not only your health, self-esteem, but also your life. 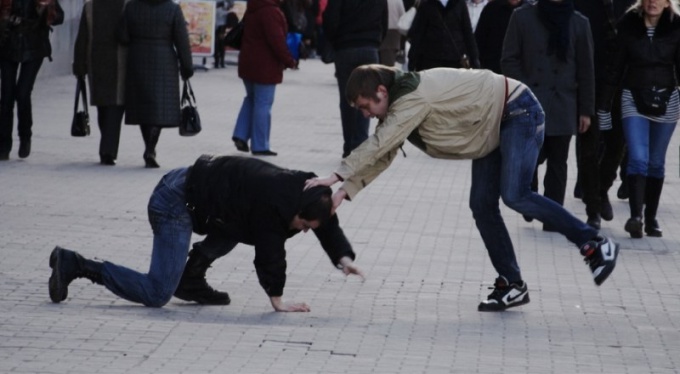 - Develop the ability to intuitively feel the threat of attack. Watch who is in your field of view, can we expect threats. If an attack occurs, it will not be sudden and you will have time to bring the situation under control.

If someone could present a threat, will instantly scroll in the imagination of your actions during the attack (what to apply the techniques as you go from shock, what handy tools can be used for self-defense, etc.).

- Learn to assess the situation as a whole. Is it possible to avoid the fight – for example, to talk to the attackers and solve the situation peacefully. Or even to flee. (Actually, the best self – defense is a failed attack!)

- If your intuition tells you that your work is very bad, attack first. Goal is 1-2 strikes to bring the enemy down.
2
Principles of victory in a street fight:
- The best defense – attack.
- The attack must be sudden and as painful as possible for the enemy. So you need to attack as hard.
- Use for self defense the most effective techniques to vulnerable parts of the opponent's body. Or use handy tools for self-defense.
- The first or second strike, your opponent must fail. You have 1-2 seconds to apply 1-2 crushing blow.
- In a street fight there are no rules of honor. Your opponent will not feel sorry for you if you lose. On the contrary, it will become even more cruel. So the enemy needs to be neutralized.
3
In battle, stick to the following sequence: the instantaneous assessment of the situation as a whole – to develop a plan of action – seizing the initiative – inflict maximum damage to the enemy – rapid removal from the battlefield.
4
When there is an attack, the enemy is always superior to you (power, weight, growth, number of forwards). Perhaps your opponent is armed. In any case, he feels his advantage. Otherwise he'd be afraid to attack you. So to win in a street fight is possible only with appropriate training. This will help you a well-planned training. Moreover, exercise should be regular, at least 2-3 times a week.
Note
Avoid excess of self-defense!
You need to act within the law.
Useful advice
If you want to learn how to protect yourself, you need a well thought out combo training:
- training methods 2-3 times a week
(5-6 receptions, but they need to work out to automatism and the crushing force of the blow);
- use punches in a bunch;
- the techniques should be simple, but effective suitable for you personally;
- train simulators imitating opponents;
- include in training physical training on endurance, reaction time;
- conduct training with their friends or participate in sparring in the sports section, or sign up in the martial arts section.
Is the advice useful?
See also
Присоединяйтесь к нам
New advices