How to determine where North, South, West and East

The location of the cardinal points it is easiest to determine using the compass, but not always, this device is at hand. Fortunately, there are several ways to find the coveted four sides. 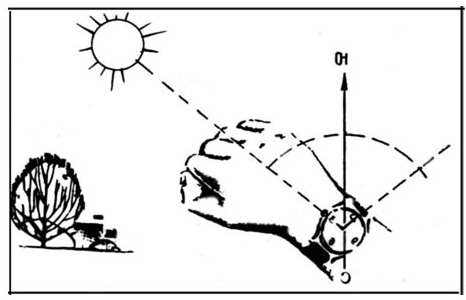 Related articles:
You will need
Instruction
1
If you get lost in the daytime, and you have got a watch, you identify the part of the world. The main thing that day was quite Sunny. To start, position the watch horizontally: the easiest option is to put them on the palm. Then turn the watch so that the hour hand was pointing directly at the sun. Now mentally divide in half the angle formed between the hour hand and 12 o'clock (winter time) or hour (for summer). Held an imaginary bisector indicate the direction to the South. For example, if you get lost in the winter, about four o'clock, heading South, the line will pass through figure 2 on the dial of your watch.
2
If you get lost around noon (at about 13 o'clock daylight time), to determine the location of the cardinal points will be even easier. To do this, stand with your back to the sun and spread your arms out to the sides. Behind you is South, on the front (where the shadow falls) in the North, the left hand will point West and the right East.
3
Directions also can be determined by the movement of the sun. Early morning – 7 hours – it appears in the East. By 10 a.m. the sun is in the South-East. In the hour of the day (and in winter in the afternoon) it is in the South. In four hours the sun can determine the direction of the South-West, and at seven in the evening light will be in the West. However, in the winter, when the sun rises late and sets early in to the movement East and West can sometimes be problematic.
4
If you need to determine the part of light night, in this case, you will need a minimum knowledge of astronomy. If the night sky is sufficiently clear, and the stars on it are clearly visible, you will be able to determine the location of the North. For this you will need to find the North star, and mentally draw from it a steep line down to the ground. The resulting point will show you the direction to the North. If you have difficulties finding the North star, first find the constellation URSA major. Pay attention to the stars forming the dipper. More precisely, two of them located on the opposite side from the handle of this ladle. Now mentally measure the distance between the two stars five times set it up from the bucket, continuing these stars formed a line. So you'll find the last star in the handle of the little dipper – Polar. However, this method will only work in the Northern hemisphere. 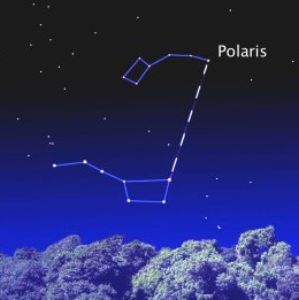 5
Ate at the sky the moon is visible, then find the compass will help its position on the sky. To start, determine the phase of the moon: first quarter (growing Crescent moon, "horns" which look to the left), second quarter (full moon) and third quarter (aging Crescent, looking like the letter "C"). If the moon is in first quarter, at 7 p.m. she will be on the South, and in the morning – in the West. Full moon at 7 PM will appear in the East in the morning – in the South, and at 7 am in the West. Waning moon in the morning will show you to the East, and at 7 a.m. –to the South.
Is the advice useful?
See also
Подписывайтесь на наш канал