How to draw a compass rose

Rose of the winds is a vector diagram, which characterizes the wind regime in a particular area, the result of long-term observations. It looks like a polygon, the lengths of the rays which diverge in different directions and which are proportional to the frequency of winds from these directions. It is often used by builders in the planning of communities, runways of airfields, the solution of many agronomic and environmental problems. 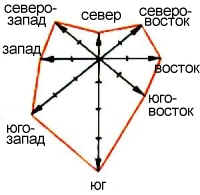 Related articles:
You will need
Instruction
1
The first written mention of the rose of the winds belong to the XII century Is a vector diagram describing the wind regime in a given place for long-term observations. The real rose of the winds, built on the basis of the number of observations may have significant differences of the lengths of different rays. It was widely used by builders, sailors of long ago. Today, almost every student draws a rose on a lesson of geography for educational purposes, but often it is used when building a house, parachute jumps or other practical problems.
2
Draw in notebooks intersecting lines showing main and intermediate sides of the horizon. Sign the names of the parties to the horizon. For this purpose, both Russian and international oboznacheniya: North (Nord) - S/N, North-East (Nord-OST) NE/NE, the East (OST) - B/E, South-East (Zuid-Oost) - SE/SE, South (Zuid) - u/S, South-West (South-West), SW/SW, the West (West) - S/W, North-West (Nord-vest) - NW/NW. Schedule should be similar to a coordinate system with additional diagonals for intermediate directions of the eight rays.
3
According to the results of observations on these lines from the center of the chart put in the scale
(1 cell (0.5 cm) — 1 day) number of days during which the prevailing wind of a particular direction. For example, a month the North wind direction blew 3 times, that is, from the center of the graph by a line pointing to the North, you need to set aside 3 boxes and call it a day. Repeat this action for all directions. Mark these dots of bright color.
4
The resulting points of the winds in the neighboring areas connect line. It is better to use colored pasta. In the middle of the graph and label the number of windless days. The rose of the winds you will be able to determine the prevailing winds in your city or region.
Note
To obtain reliable data required long-term monitoring of winds.
Useful advice
Also the wind rose in heraldry is called a symbol in the form of a stylized star. He used the emblems of various organizations: NATO (four beam), CIA (16 rays), the Ministry of emergency situations and the Ministry of transport of the Russian Federation (8 rays), as well as on the arms of the city etc.
Is the advice useful?
See also
Присоединяйтесь к нам
New advices