How to make pressed meat

Extruded meat cooked at home - a great replacement for the sausage. It is used as a cold snacks. With extruded meat to make a hearty Breakfast sandwich or serve it on the holiday table. Guests will appreciate the taste of this dish. The basic ingredients are relatively cheap, and the result is practically a delicacy. Try it! 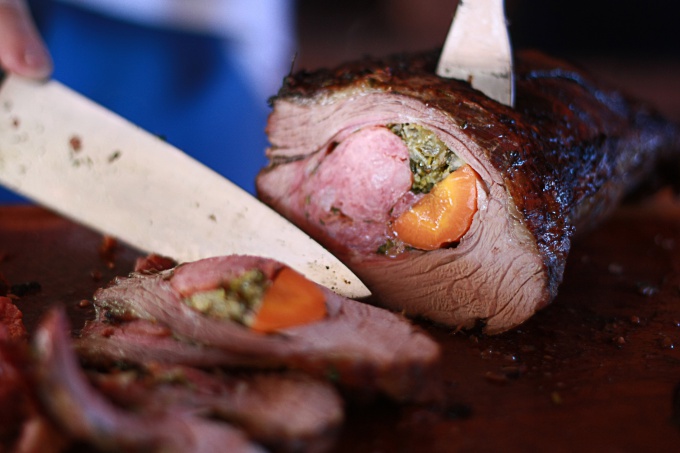 Related articles:
You will need
Instruction
1
Buy in the market or in the shop half the pig's head. It can be fresh or frozen. Ask to have it cut into 3-5 parts. Don't forget to buy one large chicken.
2
Soak the pieces of the pig's head in cold water. To do this, put them in a saucepan, cover with water, leave for 2-3 hours. Then drain the water, rinse the meat under cold running water.
3
Put in a saucepan the pieces of pork head, chicken legs. Pour all the water so that it completely covered the contents of the pan. Cover pot and place on high heat.
4
Reduce heat as soon as the contents of the pan boil. Put in it the peeled onion (whole), a few peas black pepper, Bay leaf. On slow fire cook pig's head until, until the meat starts to separate easily from the bones. In the process of cooking don't forget to salt the broth to taste.
5
As soon as the pig's head is cooked, turn off the heat. Wait until the contents of the pan to cool to room temperature.
6
In a deep Cup spread cheesecloth so that its ends hanging at the edges of the Cup.
7
On a wide flat plate carefully remove one piece of boiled pig head. Separate the fat from the meat from the bones, put them into a deep Cup on the gauze. Disassemble in this way all the contents of the pan. In order to subsequently extruded meat does not fall apart when cutting, first in cheesecloth, place large pieces of bacon rind down (to the gauze). For bacon put the pieces of pork and chicken meat,without bones. On top again put the pieces of fat, only now skin up. Laying meat and fat, peresypaya them grated on a fine grater garlic.
8
Gather together the loose ends of the cheesecloth several times will loop them. Get a tight knot of gauze with meat in it. Put the bundle of meat into the Cup so that the twisted end of the gauze was at the bottom. On top of the meat put a cutting Board on it place a weight (a heavy pot, a jar with water, etc.). Leave the meat to sit for 5-6 hours to solidify.
9
Loosen the meat from the cheesecloth, cut into neat slices, and serve.

Bon appetit!
Note
In the preparation of pressed meat in the summer, ensure that it is in the process of soaking pig's head starts to deteriorate.

In one of the pieces of the pig's head is the eye. When sorting through cooked meat, the eyes need to remove and food are not used!
Useful advice
To prasowania meat, serve with mustard or horseradish.
In the preparation of pressed meat you can use pork legs and shanks.
Do not grind the meat, separating it from the bones. Pieces of meat and fat should remain, if possible, large.
Is the advice useful?
Подписывайтесь на наш канал