How to pinch back cucumbers

To obtain an abundant, early and amicable crop of cucumbers it is important to form. So they were convenient to generate and harvest without damaging the whip, you need the cucumbers to tie to the trellis. 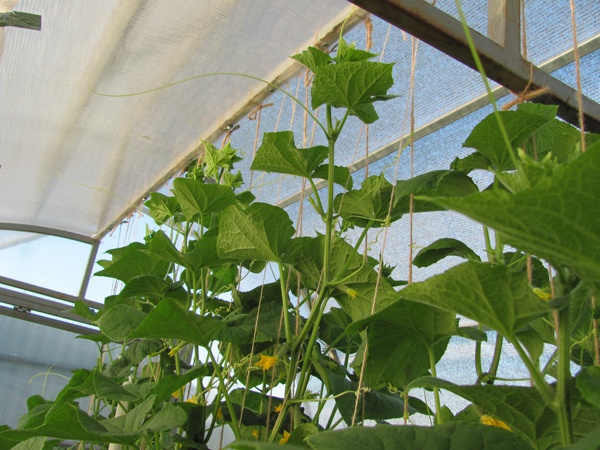 Related articles:
You will need
Instruction
1
Tie the whip to the trellis as soon as they begin to ramify and bend over. Need to tie under the cotyledon leaves and not tight, with the growth and development of plants.
2
Shaping cucumbers need depending on the variety. For example, hybrid varieties it is possible not to form at all, if they are planted early will bear fruit in the greenhouse. This grade will appear on the ovary and the fruit on all branches. Important to have enough time and not had a strong shading due to the fact that plants are thickened. So to put a hybrid cucumbers should be very rare, although this rule must be followed when planting any varieties of cucumbers, as if planting to produce a lot, even on the most fertile soil will be poor harvest.
3
When hybrid cucumbers are planted in open ground and not very early, to have time to form and to ripen all of the ovary, the whip must be formed.
4
For the formation of the lashes, cut the top 6 on a sheet and leave in the plant 3 escape. All the others produced shoots need to be removed. Irrespective of the place of landing on all the shoots you need to remove the top 6 on a sheet and in a timely manner to trim the coiled whip and yellowing leaves.
5
For the formation of ordinary cucumbers that do not have self-pollination and are pollinated by insects, it is necessary to form a plant in one, maximum in two of the stem.
6
Leave on the stems 4 growth zones and remove the top. All images of the shoots except the main stem should be cut off. If you form the cucumber into two stems, then cut the shoots appeared, leaving two major.
7
In areas of growth to leave only those points of growth which is planned to harvest. All other points of crop growth. In the formation of place all the leaves, otherwise the ovaries will not have enough nutrients.
8
If the image of the weak and twisted the whip, they also need to be removed.
9
Forming the cucumbers properly, the harvest will be earlier and more abundant.
Is the advice useful?
See also
Присоединяйтесь к нам
New advices