If planted on a plot of cucumber vine does not bear fruit, although it is in good condition, it is desirable to make the side-shoot removing cucumbers in the open ground. Why and how phasingout cucumbers? 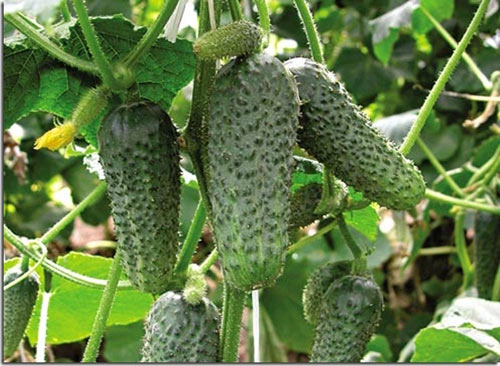 Why make a side-shoot removing cucumbers

Stepchild is useless appendages that impede the development and growth of cucumber vines, making it impossible to tie the results. They deprive the plant of nutrients and necessary moisture. Stepchildren are formed on the main sprout leaves and remove them is necessary when growth reaches six inches. Pasynkovat cucumbers in the open ground, preferably closer to the middle of July, when the cucumber stem is in good condition and can give a good harvest. At the bottom of the stem it is necessary to leave two or three sprouts, to the end of harvest, on old stem, were able to receive the young plants, one rhizome. These simple steps can increase the emergence of new ovaries of cucumber and increase the harvest period.

Methods of pinching of cucumbers in the open ground

There are two ways how to pasynkovat cucumbers in the open ground. When you first removed the shoots, which were formed at the point where there is a nodal part of the stem, and the ovary of cucumbers need to leave. It happens in the outlets of the first five leaves. Formed a good volume and the Bush. The second method is more radical, in which in the axils of the first six leaves are removed along with stepchildren and ovary. To the immature plant had started to grow and gained strength, three you need to remove the joints from the beginning of growth. In the rest of the nodal points across the vine are removed only stepchildren.

Need to know what is pollinating (male) flowers grow on the main cucumber the vine, and the female on the lateral shoots. Side branches should form a shrub, but the growth on them of laterals need to be adjusted. The excess processes will delay the ripening of the harvest.

Pollinated varieties of cucumbers are forming on the Central stem side-shoot removing the inverted pyramid. Basic cucumber vine is divided into four parts in length (starting from bottom). Pasynkovat cucumbers in the open ground begin with the first part, removing the shoots in the axils of the fourth leaf.

The second part of the scourge, after the appearance of the fifth and seventh leaf is remove side shoots: the point of growth of the lateral shoots is one leaf and the Bud of the flower, and the rest of the escape continues to further growth. You need a little pinched on the first sheet with one ovary.

The process of the growth of vines is going on, and from the eighth to tenth leaf side branches in the axils of the again pinch. In the third part of the whip the plant is at the two sheets and the same number of cucumbers. Starting from the eleventh sheet is cleared ovaries of cucumber. The shoots remain three leaf ovaries of cucumber. When the time came, and the cucumber whip formed two of the cucumber, then using pridobivanje stop further growth of the vines. From this moment begins the main branch occur on the sides.

It is desirable to prevent the further occurrence of shoots with flowers, and ovaries, as there is additional load on the stem.

Side-shoot removing cucumbers in the open ground will increase yield and improve the taste of the fruit.