How to make a whip

The whip is not only a tool of a shepherd, but also a decorative element in the house of which many only dream of. To weave a whip can be anyone and more than that - it is quite an exciting experience which can be subsequent and Hobbies. 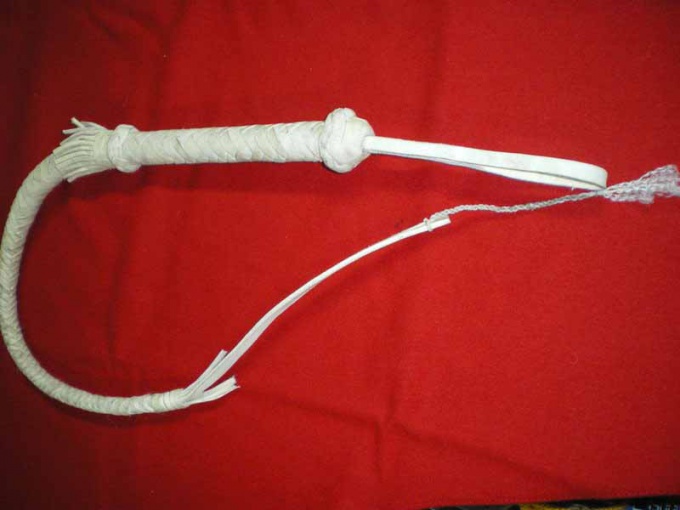 Related articles:
Instruction
1
Prepare a raw-hide (untanned skin), soak it with fat.
2
Make cutting blanks for the lower knee on your material. Width of straps should be 4-6 mm. Strips the best thing to do as long as possible. This can be cut in a spiral or diagonal. Mark on a piece of saramati strip equal to the total width of all lanes for scourge.
3
Mark the desired number of strips of the same width. Thus it is necessary to retreat 10 cm from the end of saramati for mounting the whip.
4
The planned cut strips along the lines. Dilute with an equal number of strips in different directions in each side for ease of weaving.
5
Now take an equal number of strips on either side and move in the direction of the arrow. While all the strips must lie symmetrically and evenly, not perekrashivat between them.
6
Generate the knee, inserting a cone-shaped liner from saramati. Increase the diameter of the elbow, stopping the increase of 5-7 cm to the ring loop. Next, continue weaving without liner in the other part.
7
Pass the parcel without the liner in the coupling ring and bend it to form a loop, which freely "walk" your ring. In the above mentioned way appetite the remaining part of the scourge without the knee.
8
Attach the protruding ends, dragging them between the lines on the thickening. Trim the ends, cutting them into fringe.
9
Start braiding the following lap. Note, however, that each next the knee should be thicker than the previous one. This netting should be made not of four but of six or more stripes. All the action takes place in the same way as the previous weaving of the knee (one stripe in front of the other and so on). Don't forget at the end of the netting knee to ensure the knee was not thinner than the rest of the front end loop and the initial loop of the previous of the knee is thicker.
10
The final stage of production is the whip that is attached to the last knee Flogger and his whip.
Fabricated from multiple segments by splicing the whip (from the same saramati), attach it to the last knee.
11
Start the production of crops. To do this, take a small buy on the thickness of the stick and attach it to the belt part of the whip. On a stick with a knife to make a few cuts or grind it on a special machine for more beauty and grace.
12
The varnish impregnate his whip. Cut strips from a thick saramati size 200x30 mm. Fold both edges of the strip in the form of the letter "C".
13
Thread the strip into a ring the very last knee. Fold in half so that one end of the strip was a little longer than the second. Next, make a well in the his whip corresponding to the thickness of the strip. Install the belt part of it.
14
Fasten the belt part to his whip with small nails. Dry the whip. Now you can use it for other purposes (for grazing) or to decorate the interiors of her houses, apartments, baths and offices.
Is the advice useful?
See also
Присоединяйтесь к нам
New advices