How to make a kunai at home

Kunai – a small Japanese dart, a weapon that requires skill in dealing with him. Kunai is made of iron with no sharp edges. Its length usually ranges from 10 to 50 centimeters. In home conditions it is possible to make kunai in several ways. 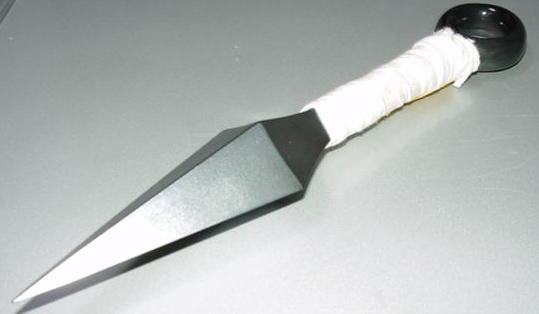 Related articles:
Instruction
1
Method the first. Paper. Take several sheets of A4 paper. Prepare scissors, glue, pencil, black and white markers and paint. Fold the sheet of paper in half twice so that when you cut with scissors, I've got four of the rectangle. The bend lines cut the paper.
2
Fold the corners of four rectangles with all sides and leave a small distance between the opposite corners. On each sheet one edge of the fold as you fold when making a paper airplane. The resulting figure again fold in half on each rectangle. In the result you will get four figures. Connect them in pairs among themselves.
3
The handles of the kunai, take the second sheet of paper and a pencil. Cut the full length of the sheet in a narrow strip. Cover with adhesive surface, pencil and spiral wrap it around the prepared paper strip. Wait until the glue dries.
4
To make the blade take the two folded from paper shapes and glue them to make a cone in the form of an equilateral blade by bending two angles in the direction towards each other. Then stick the handle of a kunai to the base of the blade, leaving the corners free. After the glue is thoroughly dry, fill the blade with small pieces of paper, so it turned out to be voluminous.
5
In the same way make the blade of the second pair of figures. Glue the ends and put on the first blade. Cut a narrow strip of paper and make a ring, cut a small hole. This construction glue to the handle of the kunai. Dry the dart and paint it.
6
The second way. Wood. Of wood or plywood cut out of the Japanese dart. Sharpen the ends and obstructe the handle of the kunai. Dilute salt solution, and soak in it the kunai. This will give him the strength and weight. After the dart is soaked, remove it from the solution and thoroughly dry. Coat the kunai with varnish.
7
The third way. Lead. Melt the two candles and get a cast of the kunai. Paraffin in the mold pour the plaster. Detach the wax from the plaster mold of the kunai. Wait for complete drying of the plaster. Melt lead in a tin can over the fire of the gas stove and the molten pour it into a plaster mold. Wait for complete solidification of the lead, and then remove it from the form, undercut with suspenders sandpaper and a file and Polish.
Is the advice useful?
Подписывайтесь на наш канал