The pros and cons of vacation in the Crimea

Crimea - Peninsula of the mysterious, alluring people. And of course, a great alternative to the rest on the Russian coast. Rest in Crimea has its pros and cons, which I propose to analyze, and to make the right choice. 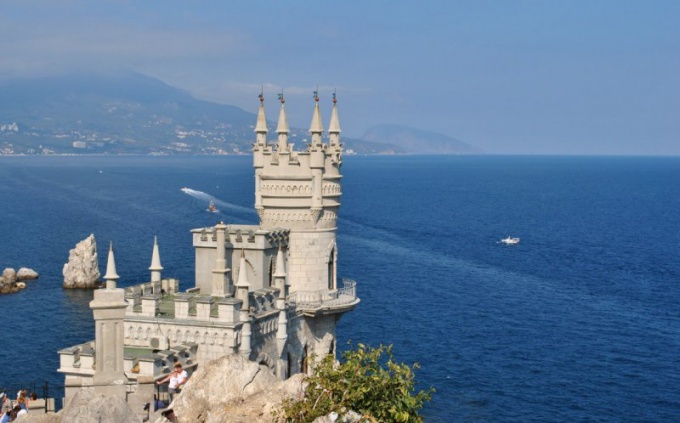 Related articles:
The first advantage is the clean sea, great coast and different types of beaches: large, small sand, pebbles, stones. The West coast beaches are famous for fine sand and gently sloping seabed. Closer to the southern coast start of sandy-pebbly and pebbly beaches. On the South East coast everyone will find a beach to your liking: from sand to rocky.

The second plus is the beautiful nature. Mountains, cliffs, forests, vineyards, bays, huge number of nature reserves, waterfalls, caves – it's all there in the Crimea. Near Yalta on the 40 acres of land located Nikitsky Botanical garden. And between Sudak and Feodosia are the ruins of an ancient volcano Karadag. Now there is a reserve, and to look at the Golden gate of Karadag tourists come from all over the world.

Plus a third – many cities with interesting history, sights and monuments. The most visited city of Sevastopol, and the most beautiful palaces of Livadia, Massandra and Vorontsov. Two cableways are also not left without attention. Especially one of them leads to the Swallow's nest, located at the top of AI-Petri. In every village in the Crimea will show you at least a few attractions: cave city, villas of famous people, temples and monasteries, factories, wine-making, castles, parks, aquariums, dolphinariums and more. In Crimea you can go back every year and discover something new.

The fourth plus is a large number of transport in the Crimea from Russia. You can get to Simferopol and Sevastopol by plane or train. And hence open the road to any city and village of the Crimea. To Yalta and Sevastopol, there are buses from many cities of Russia. Well, the most convenient means of transport, of course, the car.

The fifth advantage is the climate similar to our South coast (not as hot as in Sochi and Adler, more like the weather in the Anapa and Gelendzhik). Plus Crimea – Russian Peninsula. And you don't need to learn a foreign language. But there is the opportunity to practice foreign languages with tourists from all over the world.

You can highlight another advantage of various opportunities for recreation. Absolutely economical rest in campsites (practically free), or in private houses (from 200 rubles per person). And you can rent an apartment (from 700 rubles per day for the whole apartment) or live in a boarding house, hotel or rest house (from 1000 rubles a day). In the Crimea there is a holiday on the most different purse.

Well move to the downside. In my opinion, the three of them. The first is, of course, customs. If you select the wrong time, it is likely to stand at the border from 5 to 10 hours. So try to get to the customs office closer to the night. July and August are the worst months – kilometer traffic jams on the border.

Another minus – it's expensive travel. For example, from Moscow second-class ticket will cost about 3 000, the coupe is about 5500. The ticket for the plane will be a little more expensive than 6 000. From Rostov-na-Donu and Krasnodar to Sevastopol and Yalta buses. Ticket price - from 1200 to 1500 rubles. If you decide to go by car, don't forget before the border to fill a full tank. Petrol in Ukraine is more expensive: 92 minutes- about 10.5 (about 42 rubles) UAH, and 95th- about 10,7 hryvnia (44 rubles). By the way, to change the hryvnia better away from the border and waterfronts in major cities (Simferopol, Sevastopol, Yalta, etc.) in banks of Ukraine.

Well and the third minus is a pretty long road to the Crimea. From Moscow the train journey will take just over a day, on the plane 2.5 hours. If you go from Rostov-on-don or Krasnodar by bus, you will have to spend on the road from 11 to 14 hours. By car time individually, depending on the speed and number of stops.

If you decide to go on vacation in the Crimea, then again analyze the pros and cons. And safely plan your trip!