Rest in Crimea: a review of the best beaches

The Crimean Peninsula is famous not only beautiful scenery and mild climate and beautiful beaches for every taste: pebble, sandy and mixed, improved and wild, located in major cities and secluded coves. 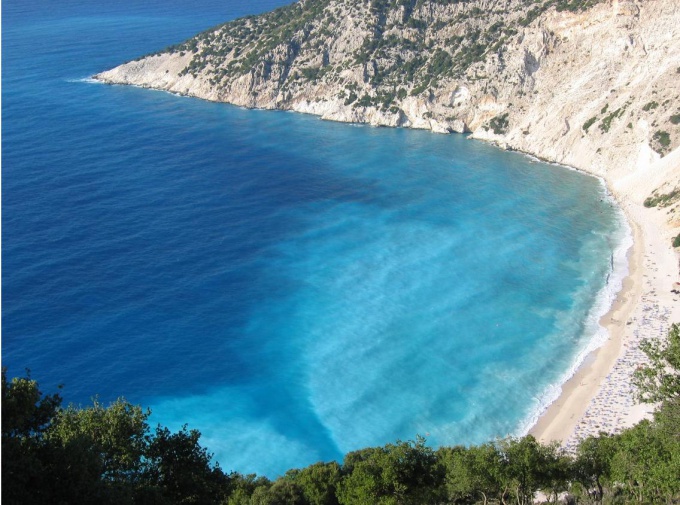 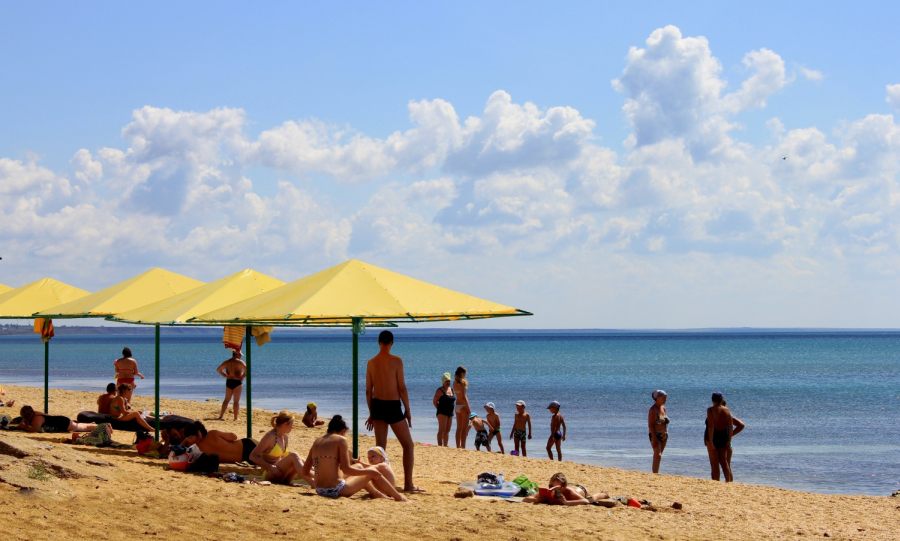 The Golden Sands beach, located on the coast of Feodosia Crimea is the ideal place for lovers of comfortable and well-maintained hotel. The name shore length of 15 km got the sand charm gold color, which in its composition is considered one of the cleanest in the world. In addition, locals say that the sand has healing properties – walking barefoot on the sandy shore improves kidney and strengthens blood vessels.

Golden beach is great for youth and for families. A gently sloping entrance to the sea and the warm water makes it ideal for children who can not only swim, but also to build sand castles. For vacationers offers developed tourist infrastructure with numerous cafes and restaurants, various attractions, water activities and playgrounds. Every evening at Golden Sands make parties where young people can have fun.

The beaches of Cape Tarkhankut 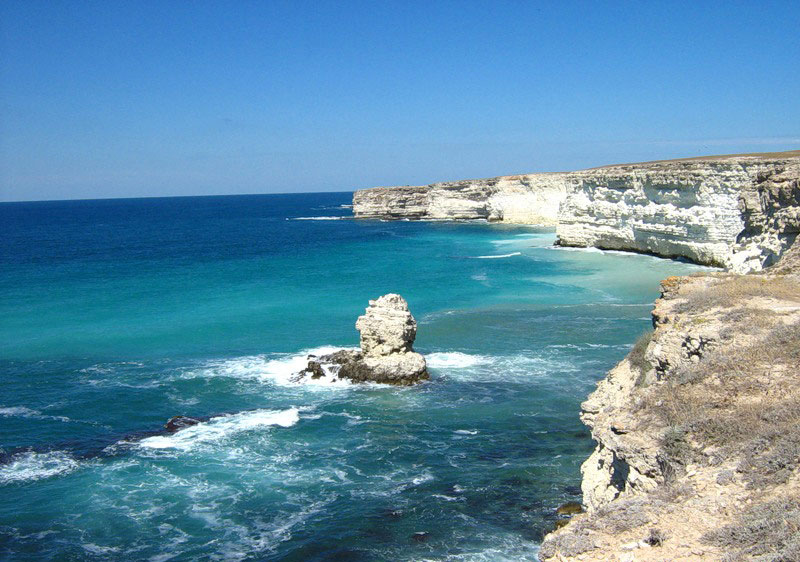 Another amazing place with an extraterrestrial landscapes, located in the extreme Western part of the Crimean Peninsula – Cape Tarkhankut. Rocky hills and scant vegetation makes the Cape look real Martian expanse. A distinctive feature of this resort is the crystal clear water, because there is no river empties into the Black sea. Thanks to this feature Tarkhankut has become a favorite place for divers. The quiet sea coves and white cliffs attract tourists who prefer a quiet and peaceful holiday.

The beaches located on Cape Tarkhankut, mostly pebbly, and the bottom quite rocky. However, the clear water makes them quite safe for swimming and snorkeling. For a relaxing beach holiday better suited to shallow bays Olenevka, Mizhvodne and the black sea. At these resorts the water due to its shallow depth warms up quickly, which makes possible the opening of the beach season in early may.

Tarkhankut – is, perhaps, one of the most romantic places of the Crimean Peninsula. Here is a natural saltwater pool (the"Cup of Love"), surrounded on all sides by high cliffs. According to the legend, the lovers in this place you can check your relationship strength. This young couple needs to jump into the water from a cliff, holding on with hands. If during a jump lovers do not unclench hands, they have a long and happy life. 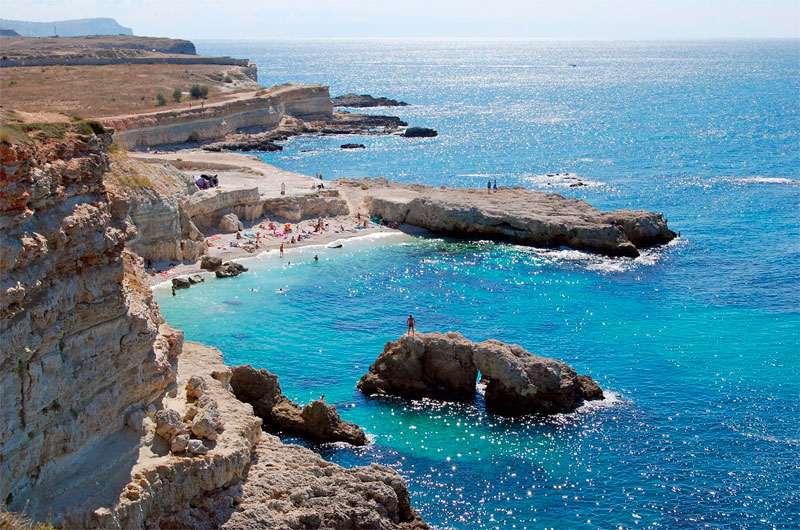 If you prefer a beach holiday, full of vivid memories and unforgettable experiences, then you definitely are worth a visit Cossack Bay, located on the Cape Chersonese. This place is not only amazing and beautiful landscapes and clean sea, but also a great opportunity to touch history. Tourists resting in the Cossack Bay, will be able to visit the Kherson lighthouse – the highest lighthouse in the European part, to see the ruins of the ancient city of Chersonesos and visit the Church of St. Vladimir.

The Cossack Bay beaches are not crowded, allowing you to fully enjoy the local scenery and warm sea water in privacy. Stay at Cape Chersonese, of course, will appeal to lovers of diving and underwater fishing, which fully contributes to the clear waters and rich fauna living in the deep sea. In addition, on the territory of the Cossack Bay has a yacht club, where anyone can rent a yacht and make it an unforgettable boat trip. 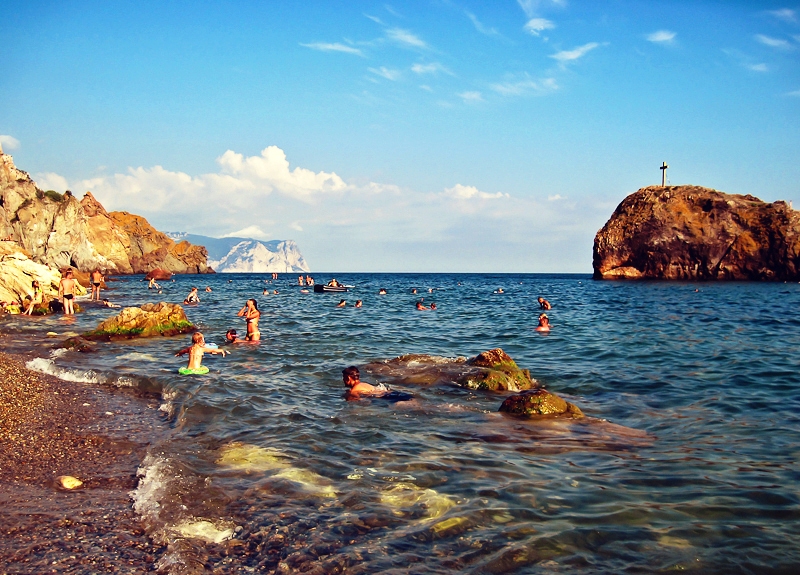 Another unique place not far from Sevastopol is Jasper beach. Its name he received in honor of Jasper, which previously were often found. Jasper beach is considered one of the most picturesque places in the Crimea is a narrow strip of land surrounded on three sides by steep cliffs. To get to the beach in two ways: the steep stairs with 800 steps, and by boat from Balaklava. The first option is ideal for people who prefer active rest on the nature, and the second lovers of sea trips.

The sea at Cape Fiolent clean with a lovely turquoise shade, and the coast is studded with colorful pebbles. Earlier this place was wild and was popular mainly among the local population, but lately Jasper beach was gradually transformed, acquiring the various benefits of civilization. 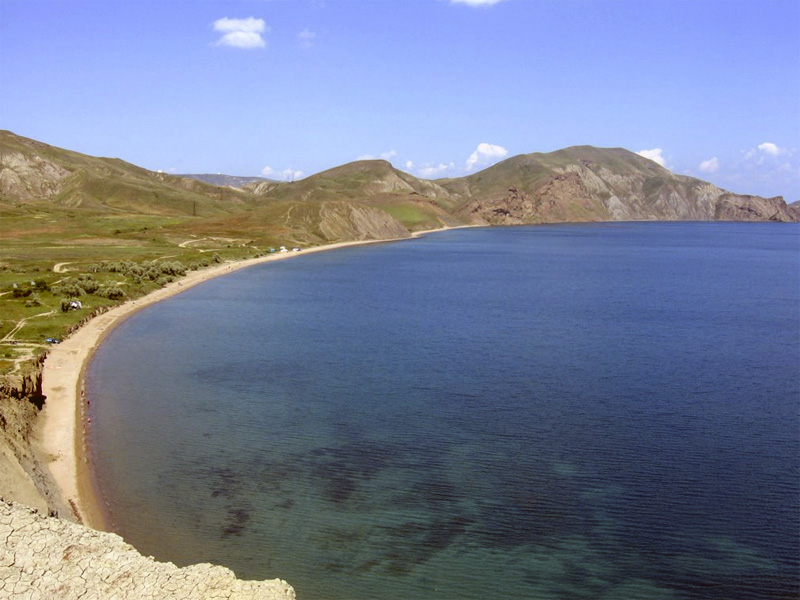 Quiet Bay near Koktebel is one of the most famous places in the Crimea, which has long been popular with lovers of "wild" holiday. Even in bad weather the sea in this place is clean and very calm. This calm Bay is attributable to high hills and cliffs protecting it from the winds.

Shore in a Quiet Bay with a sandy gentle slope into the sea. However, a good coastline – this is not the only thing tourists from all over the world appreciate this place. Holidaymakers on the beach people can enjoy magnificent views of the Cape Chameleon, which depending on the time of day changes its color. 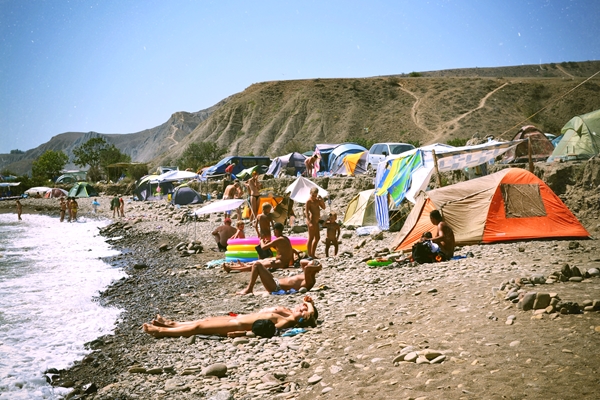 Fox Bay is a very unusual place, located between the Resort towns and Coastal that are popular with tourists who want to experience full freedom from the benefits of civilization and to achieve maximum unity with nature. Public, resting on the beach in Fox Bay is quite diverse: you can meet as a regular and avid nudists. However, such "promiscuity" did not prevent tourists to enjoy the sand and pebble beach with length of over 5 km.

Sea Fox Bay clean and warm, and at dawn you can often see dolphins splashing in the water. Near the Bay there is a local winery where you can taste and buy the delicious Crimean wine. 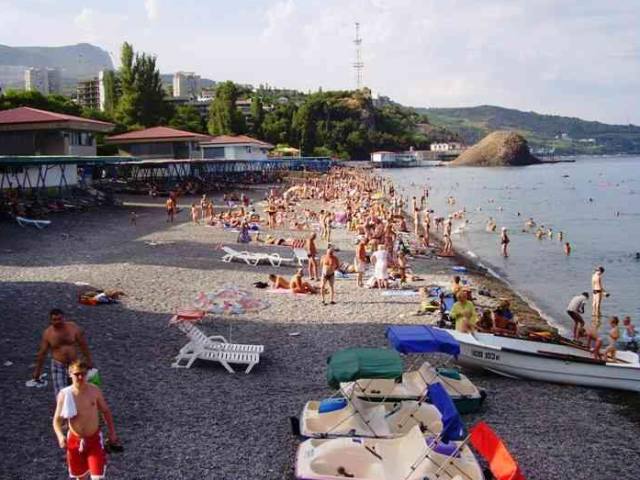 Partenit is a small town located in the southern part of the Crimea between Alushta and Gorsepaw. This place is ideal for a family beach holiday. Unlike the more famous Crimean resorts nearby, rest in Partenit will cost much cheaper.

In Soviet times Sochi was the Spa resort, this peculiarity has been preserved until now – most of the beaches on the resorts, so access to the sea is paid. However, it is rather an advantage than a disadvantage, because for relatively little money you get well-groomed coastline, free umbrellas, sunbeds and showers. Also available to the guests provided entertainment such as jet-skiing and catamaran sailing.

The Beaches Of Azov 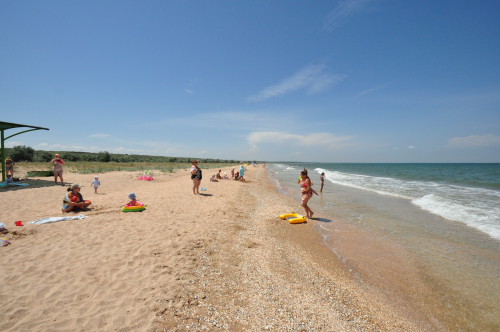 Some noteworthy beaches of the Azov – Genichesk, Arabatskaya Strelka, mysovoye, Crimea, Shelkino. They are perfect for a classic beach holiday with children: a smooth entrance in the sea, gently sloping beach and warm water which warms up quickly with steady sunshine and little depth. In addition, the local population says that the water is healing, especially after a little excitement. It is believed that at this time from the bottom raises the 92 elements which have a beneficial effect on the human body. On the beaches of the Azov you can find entertainment for every taste: from boat rentals and fishing gear, to rides on bananas and jet skis.