How to insert a zipper dog

It is a shame, when there is a product with zipper and dog (runner) on it. Dog may be off the rails, to get lost or to be broken. Very often a product with a lightning without dogs are in the Studio. Master in its place sewing new, or changes to the old dog. Try to understand how you can replace a dog in the home. 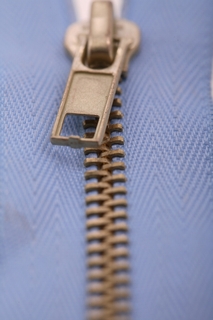 Related articles:
You will need
Instruction
1
If the flash is detachable and the dog just jumped and left you in the hand, pass it from the top to the other side where there is a limiter plug with socket. The slider should go flat side down. Doggy easily slides on the links.
2
If the dog is lost or broken, in use, purchase a new runner. This can help the seller. He lightning will pick up any room of the runner.If zip one-piece or sold by the meter, buy as many runners as you need. For example, the cases often put two runner sliding towards each other.
3
Look closely at the other side of the tape where they put the slider. On top of the rail is likely to come off the limiter. He holds the pawl in the upper position. If the limiter is moved, adjust it using the pliers so that the dog popped up again. If the limiter is lost, make the tack with a needle and thread. The clip run over the edge of the braid several times. She will again come off the runner.
4
In the case of all-in-one zip, a bit, disconnect the ends of the rail and insert each in the dog. Gently move down the slider. It will go with the effort. Do not overdo it with the pressure force so as not to spoil the tracks.If the runner despite the efforts won't move, slightly straighten the cuts on the dog (where the rails are inserted). Slide the dog down and retighten the slotted pliers to their original state.
Note
When buying a dog, pay attention to the number and title. Runners vary depending on the type of lightning, tractor, metal or twisted.
Useful advice
Zipper with oiled or lost teeth must be replaced.

Too tight or badly hung zipper can be adjusted, turn the pliers to the thumb.
Is the advice useful?
See also
Подписывайтесь на наш канал