Where to go in Pskov

Pskov – a city-Museum with centuries-old culture that keeps the richest events of the past in his memory. There are more than forty churches and temples, about ten monasteries, ancient walls of the Kremlin that are striking in their power and antiquity. Be sure to visit the main sights of Pskov on arrival in this amazing city. 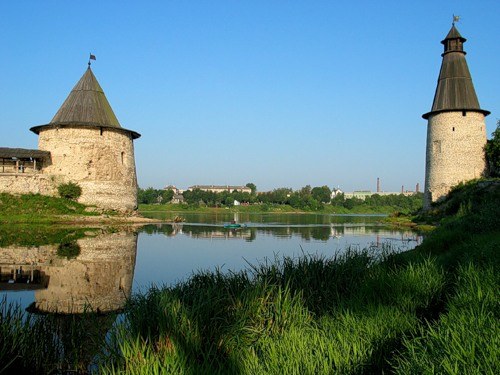 Related articles:
One of the most famous monuments of the fifteenth and sixteenth centuries - the Cathedral of St. Basil the Great on the Hill. The Church is located near the Oktyabrsky Prospekt on Vasilievsky hill, which is surrounded by green trees and is a kind of island among the marshes extensively. A sample of the middle ages represents the Pskov fortress. High thick walls located along the natural borders (the great and Pskov rivers). They once made the Pskov fortress impregnable. The fortress walls that originally occupied only five hectares, and over time began to cover more and more territory. There are five rings of fortress walls of Pskov, the fifth ring were able to include part of the territory Zapskovye. Fortifications consist of nine kilometres of walls and thirty-five towers. Pskov Historical and art Museum-reserve "pogankiny Palaty" is the largest Museum in Pskov. It is situated in the historical part of the city, in a stone building of the seventeenth century, near the walls of the Middle city. This building belonged to the merchant Sergei Pogankiny, after whose death the house was transferred to the Church. At the moment there is the exhibition, which includes objects that reveal the culture and life of the Pskov land from the Neolithic to the present day. The main Shrine of Pskov – Trinity Cathedral, which during its rich history was built four times. In the tenth century it was built of wood, but the fire burned. Then were erected there a stone Church, but later the building collapsed. In the fourteenth century, the Cathedral was rebuilt by the local architect, and only to the end of the seventeenth century had completely finished the construction of the Cathedral that you see today. In addition to the remarkable architecture of great value is the seven-tier gold-plated wood carved iconostasis of the eighteenth century, located in this temple. About the sights of the Pskov land, acquainting with the culture and history of Russia, I can speak a lot and very much. These extraordinary and sacred places decorated with Russian landscapes, create an atmosphere of peace and harmony. It is here that I want to listen to the silence, breathe and think only about the good. Be sure to visit Pskov and its attractions.
Is the advice useful?
See also
Присоединяйтесь к нам
New advices